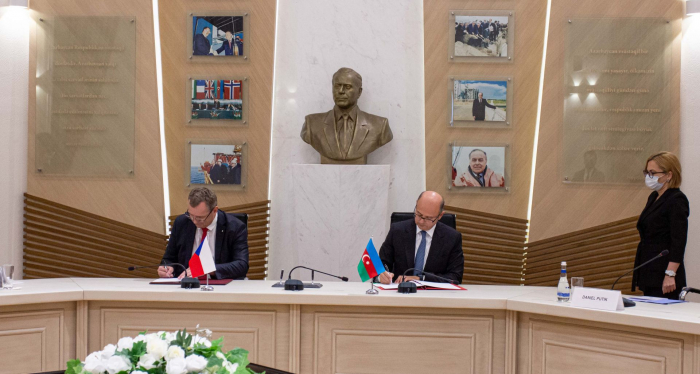 An agreement on expansion and development of cooperation in the field of energy was signed between Azerbaijan and the Czech Republic on September 30, AzVision.az reports citing the Azerbaijani Energy Ministry.

The document was signed by Azerbaijan’s Minister of Economy Parviz Shahbazov and Czech Ambassador to Baku Milan Ekert.

A meeting was held before the signing ceremony between Azerbaijani Minister of Energy Parviz Shahbazov and Foreign Minister of the Czech Republic Jakub Kulhanek.

In particular, Shahbazov stressed that the expansion of the Southern Gas Corridor will open the way for cooperation in the field of low-carbon economy.

The minister also informed about the projects being implemented in Azerbaijan in the field of renewable energy with a total capacity of 700 MW, for which an auction is planned to be held, and invited the Czech companies to take part in this process.

Kulhanek also stressed that energy cooperation has played an important role in the development of strategic partnership between the two countries.

The Czech foreign minister stressed the importance of assessing the available capabilities of the business communities in his country.

Shahbazov and Extraordinary and Plenipotentiary Ambassador of the Czech Republic to Azerbaijan Milan Ekert signed a document on cooperation in the field of energy following the discussions.

The agreement envisages the expansion of bilateral cooperation in the field of energy, oil and gas, petrochemistry, renewable energy sources, as well as bioenergy and the establishment of ties between the relevant economic entities in accordance with the national legislation of both countries.

The support for the implementation of joint energy projects with third countries has been also expressed.

Moreover, the document covers such issues as the development of cooperation in the field of energy efficiency and energy saving in the housing sector and at big energy-intensive enterprises, mutual exchange of information and experience, holding of training, joint seminars, conferences and forums.

The agreement also envisages the creation of a joint working group on energy cooperation.