Why do people run marathons? 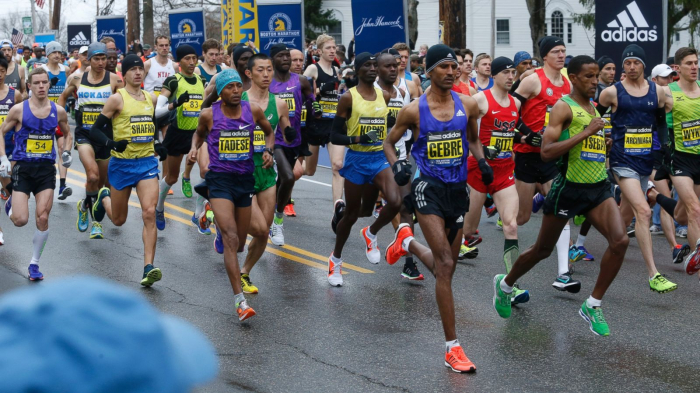 Ahead of the London marathon this weekend, Anne McCarthy explores what motivates people to take up endurance running.

At the 1896 Olympics in Athens, the first organised marathon involved only 17 athletes.

Marathoning has come a long way since. The winner ran a time of 2:58:50 – nowadays this would be a respectable time for an amateur, but it's almost an hour slower than the fastest runners today. We also now understand a great deal more about the science of long-distance running, from its health impacts to the psychological motivations.

So, what are the benefits of running a marathon, and why are the races so popular?

With no hopes of winning a gold medal or getting one's name etched in sport history books, some may wonder why people run marathons at all. The training requires a major commitment of time, energy and sweat, and the races can be gruelling.

Yet despite that, marathon participation in the US has risen 255% since 1980, and applications for the London Marathon have grown every year since the first race in 1981, which had 7,747 runners. London now gets applications from nearly a quarter of a million runners for one of its 50,000 places. In 2018, the number of worldwide marathon finishers was estimated to be 1,298,725.

The most obvious reasons why people run them are a positive health and mental wellbeing effects. While some people worry about the harms you can do to your body if unprepared, the overall health benefits tend to significantly outweigh any risks with proper training. The benefits for weight loss and cardiovascular health are well known, but research is continually unveiling new upsides. Running marathons cuts years off your "artery age", for example, and a recent study led by Astrid Roeh at the University of Augsburg showed a possible relationship between improved cognitive function – and greater eye health – as a result of marathoning.

But what about the psychological motivations? Each runner will give you different answers.

Matt Huff, a New Yorker and author of Marathoner: What to Expect When Training for and Running a Marathon who completed his ninth marathon this year in Berlin, says his passion for racing "stems directly from my being a delayed-gratification junkie".

"It's the feeling of accomplishment I get crossing the finish line that keeps me coming back," he says. "There is a surge to it you don't get from other sports, because the sheer amount of time and effort that goes into a single marathon dwarfs that of an individual soccer game or tennis match. Can you push yourself through enough hell to finish is the only question."

For other runners, rising above physical limitations is part of the appeal. Tom Eller is a deaf-born marathoner who lives in Essen, Germany, and has run 11 marathons. He ran a 2:47:11 in the 2019 Berlin Marathon, making him the fastest deaf German marathon runner. Eller, who teaches deaf and blind students, says, "I challenge my life, which has communications barriers, by running marathons around the world to show people that even disabled people can achieve great things. For my deaf kids and teenagers at school, I am a role model."

And for Kailey Bennet, a faculty assistant at Harvard University, marathons help her transcend her epilepsy."There have been a few periods in my life where I was too sick to do any sort of physical activity – therefore, each time I cross the finish line I am so grateful for that accomplishment." But mainly she runs because it is a way to experience other cultures. "It's how I explore the world,” she explains. "I firmly believe one of the best ways to experience a new city is on their marathon day."

However, while every runner has different personal reasons, there are some general trends that researchers have observed underpinning people's attraction to racing over long distances. A study from researchers at the Jerzy Kukuczka Academy of Physical Education in Poland found that "proving the ability to run a marathon race constituted an important life event for a person" and that it could impact their beliefs about the successful execution of potential future achievements.

Carys Egan-Wyger at Sweden's Lund University found that aspects of daily life are tangibly and measurably mirrored in marathon running, such as the tracking of progress, along with the necessity of productivity and efficiency. Across her interview subjects, runners tended to cite three primary motivators: freedom, achievement and competition.

But less obviously, Egan-Wyger also suggests endurance running can also be a way of gaining social status. Showing you are capable of a long-distance race projects qualities of health, productivity and efficiency to others, she argues, akin to cultivating a personal brand. This effect is only supercharged through social fitness apps that allow runners to share their achievements.

This may dovetail with research by Jenna Gilchrist at the University of Toronto and colleagues about the role of pride during training and races. Those who experienced greater pride about their running tended to put greater effort and time into their training.

There is, however, also some evidence that motivations differ between the sexes. In one study of runners in Poland, researchers concluded that "female marathon finishers were more motivated than men by weight concern, affiliation, psychological coping, life meaning, and self-esteem, but less motivated by the competition."

Intriguingly, studies also suggest there are also differences in pacing and performance between the sexes over long distances – see "The female advantage".

A final commonly cited motivation for running long-distance is the feeling that follows – the so-called "runner's high". So, what exactly is going on in the brain for marathon runners?

It's commonly thought that hormones called endorphins play a role, but the calm, relaxed feeling that some people report may instead be due to a rise in endocannabinoids in the bloodstream. Unlike endorphins, these can pass into the brain.

During long-distance running, the brain may also dilute the memory of pain. In 2019, Dominika Farley of Jagiellonian University in Poland and colleagues drew parallels between the pain from giving birth and from marathon running. Both tend to be underestimated when later recalled, which may be explained by the release of oxytocin in the brain which influences how the memory is encoded, say the researchers. The way pain is remembered is also viewed through the context: if a marathon medal or a baby is on the other end of the pain endured, one may regard the extent of the pain differently.

This may help to explain why "repeat marathoners" are common. An 18-time marathoner and teacher, Erin McBride, ran her first marathon in 2005 when she turned 18. "I was convinced I'd be a one-and-done runner. Tick it off the bucket list and never look back. But that November day in 2005 changed my life forever. And since then I've committed to running at least one marathon a year, and many have been with a family member by my side."

But few people exemplify this willingness to repeat the challenge than 58-year-old Liverpool runner Andy Glen who has completed 176 marathons in 42 different countries. His current target is to run 200 marathons in 50 different countries. He isn't immune to struggle, though. "I am often asked whether running a marathon after all this time becomes easier," he says. "The simple answer is no. The last six miles are just as challenging as they were when I ran my first."