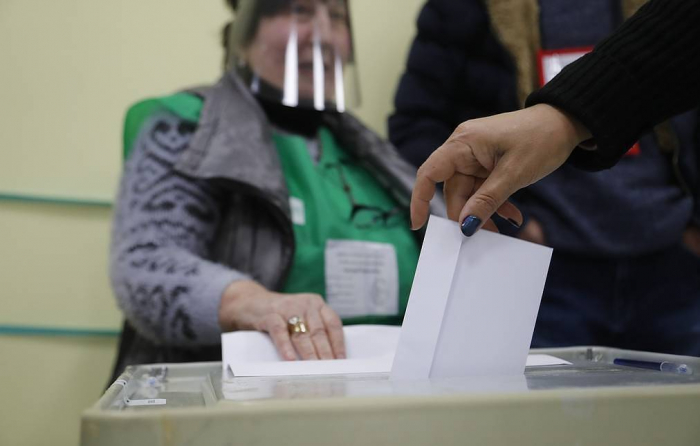 With data from 38.63% of polling stations in Georgia processed, the ruling Georgian Dream - Democratic Georgia party is winning Saturday’s municipal election in the country, getting 48.56% of the vote, the country’s Central Election Commission said on Sunday, AzVision.az reports citing TASS.

The United National Movement (UNM) party, founded by former president Mikhail Saakashvili, is the runner-up, getting 31.23% of the vote. ‘For Georgia,’ the party of former prime minister Georgy Gakharia, comes third with 6.87% of the vote.

In a separate development, Tbilisi Mayor Kakha Kaladze leads the mayor’s election in the Georgian capital with 45.5% of the vote, with 41.61% of votes already counted. Opposition candidate Nika Melia has 34.13%. Ex-premier Georgy Gakharia is third, with 8.97% of the vote.

A runoff will be held if none of the candidates manages to cross the 50% threshold.

Georgia has about 3.5 million registered voters. Over 3,700 polling stations opened across the country on Saturday. Georgians elected deputies of city and regional legislatures, as well as mayors of 64 municipalities, including the capital Tbilisi. City and district legislative assemblies in Georgia are elected through a mixed system, combining proportional representation and 'winner-take-all' districts. The threshold for the city council of Tbilisi is 2.5%, while for other municipalities it stands at 3%. A total of 43 parties participated in the elections.