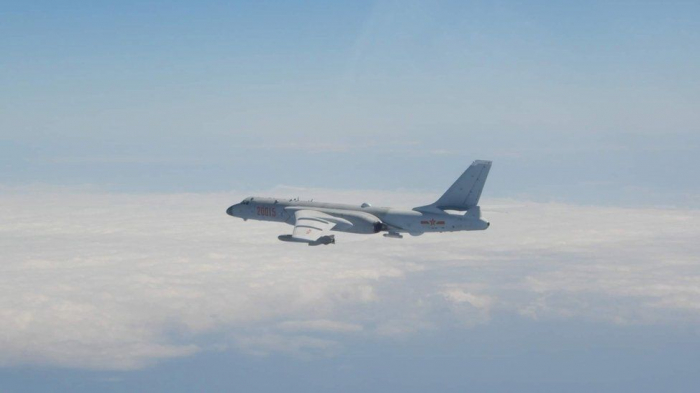 Tensions with China are at their worst in 40 years, Taiwan's defence minister has said, warning of the risk of an accidental strike between the two.

Taiwan considers itself a sovereign state. China, however, views Taiwan as a breakaway province.

It has not ruled out the possible use of force to achieve unification.

While Chinese jets have not been flown all the way to the island, Mr Chiu warned that there was a risk of a "misfire".

Taiwan's air defence zone, which it monitors for threats, extends over an area that covers the Taiwan Strait and a large swathe of the Chinese mainland. They consider jets crossing an unofficial line between China and Taiwan as an incursion.

Mr Chiu also warned China would be capable of mounting a full-scale invasion of the island by 2025.

He was speaking as a parliamentary committee in Taipei considered a multi-billion-dollar defence spending bill to build missiles and warships.

Acknowledging that China already has the capacity to invade, he said such a move would get easier in coming years, though he did not elaborate.

Taiwan broke away from the mainland as communists seized power in 1949.

Analysts have warned that Beijing is becoming increasingly concerned that Taiwan's government is moving the island towards a formal declaration of independence and wants to deter its President Tsai Ing-wen from taking any steps in that direction.

A number of Western allies of Taiwan have expressed concern at China's open display of military might recently.

However, US President Joe Biden said his Chinese counterpart Xi Jinping had agreed to abide by the "Taiwan agreement".

Mr Biden appeared to be referring to Washington's longstanding "one China" policy under which it recognises China rather than Taiwan.

However, this agreement also allows Washington to maintains a "robust unofficial" relationship with Taiwan. The US sells arms to Taiwan as part of Washington's Taiwan Relations Act, which states that the US must help Taiwan defend itself.

The "One China" policy, which Mr Biden and Mr Xi are believed to have referred to, is a key cornerstone of Sino-US relations but is distinct from the One China principle, whereby China insists Taiwan is an inalienable part of one China to be reunified one day.

"I've spoken with [Mr] Xi about Taiwan. We agree ... we'll abide by the Taiwan agreement," said President Biden. "We made it clear that I don't think he should be doing anything other than abiding by the agreement.

Analysts suggest that despite the heightened tensions, relations between China and Taiwan have not deteriorated to levels last seen in 1996 when China tried to disrupt presidential elections with missile tests and the US dispatched aircraft carriers to the region to dissuade them.