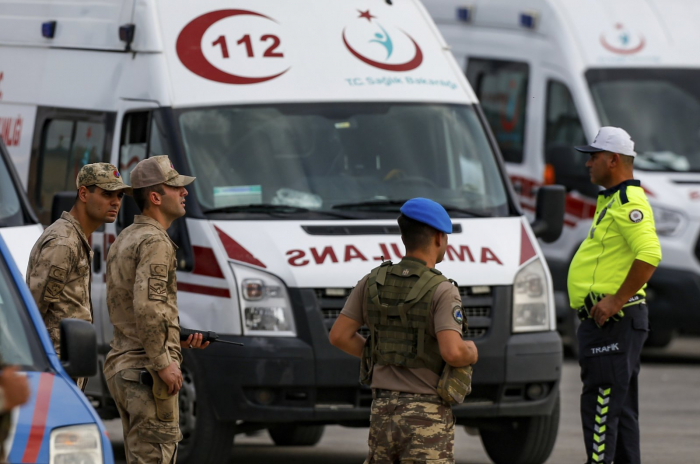 The YPG/PKK terrorists attacked an armored vehicle with a guided missile in the Operation Euphrates Shield area, the ministry said.

Initially, one officer died immediately after the attack and three others were wounded, but another officer succumbed to his wounds later on.

Turkey has been carrying out operations against terrorist groups in northern Iraq and Syria, particularly the YPG/PKK.

Based on Article 51 of the United Nations Charter, Turkey launched Operation Euphrates Shield on Aug. 24, 2016, using its right of self-defense to eradicate terrorist elements that threatened its national security, primarily Daesh, and ensure the security of the border in northern Syria.

On the first day of the operation, the Syrian town of Jarablus, which borders the Karkamış district of Turkey's southeastern Gaziantep province, was liberated from terrorist elements. On Feb. 23, 2017, the northwestern town of al-Bab was freed from Daesh terrorists.

During the operation, an area of 2,055 square kilometers (793 square miles) between the two towns was also cleared from terrorist groups in 217 days. Turkish soldiers and the Syrian National Army (SNA) eliminated more than 3,000 Daesh terrorists in almost seven months.

On March 29, 2017, then-Prime Minister Binali Yıldırım announced that the operation was successfully completed. At the end of the operation, Turkey focused on providing security and stability in the region to create the necessary conditions for the return of civilians displaced due to terrorism.

To that end, security forces and officials trained in Turkey started operating in the region. Through Turkey's initiatives and support in health, education and public services, the population in the region has reached almost 2 million.

Districts of northern Syria under Turkish control are regularly targeted by the YPG, which seized large swathes of land in the northern parts of the war-torn country with the Assad regime's blessing when clashes intensified in 2012.

Ankara considers the YPG, which was backed by the U.S.-led anti-Daesh coalition on the pretext of fighting the Daesh terrorist group on the ground, a grave national security threat.

Syria's war has killed more than 387,000 people and displaced millions since starting in 2011 with the brutal repression of anti-regime protests.