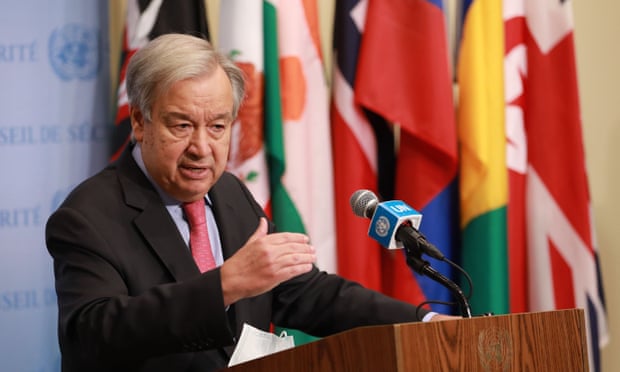 G20 leaders and ministers will meet by video-conference on Tuesday to discuss a United Nations proposal to channel funds to Afghanistan to ease its worsening humanitarian catastrophe.

It will be the first time the world’s richest nations have met to discuss the consequences of the US withdrawal from Afghanistan and the Taliban takeover on 15 August. Afghanistan was 75%-dependent on foreign aid before the takeover, and funds held overseas have been frozen by the US.

The UN secretary general, António Guterres, said the country was at a make-or-break moment. He told reporters in New York: “Respecting international law and principles, we have to find ways to inject liquidity into the economy for the economy not to collapse. If we do not act and help Afghans weather this storm, and do it soon, not only they but all the world will pay a heavy price”.

He said the cash could be injected via UN trust funds, and other instruments. “I am particularly alarmed to see promises made to Afghan women and girls by the Taliban not being honoured,” he added.

The video conference is being hosted by the Italian prime minister, Mario Draghi, whose country holds the rotating G20 chair. Draghi has struggled to bring together G20 countries together for the summit. Russia and China oppose the western policy of imposing political demands on the Taliban as a condition of aid, and the US is also unenthusiastic, mainly because it does not want to revisit what has been widely seen as a foreign policy disaster. US officials met the Taliban bilaterally in Doha, Qatar at the weekend.

Draghi is keen to find a way via the UN and charities for funds to reach ordinary Afghans without providing support to the Taliban, who have done little to suggest they have changed their views towards women or dissent since they ruled most of the county in the second half of the 1990s. The Taliban have pleaded for more time to get girls back into secondary education.

In a sign of the diplomatic tensions, Russia has arranged a rival Afghanistan conference in Moscow on 20 October, to which Pakistan, India and Iran have been invited. Iran is also arranging a conference of its own.

The Italian-led video conference is scheduled to last no more than three hours and will not discuss the issue of recognition of the Taliban. Instead it will look at how aid can be dispatched to the country without endorsing the Taliban.

Guterres is himself due to join the summit, underlining the central role given to the N in tackling the crisis – in part because many countries do not want to establish direct relations with the Taliban. He said the UN through September had engaged with the Taliban province by province to ensure its female staff can be free to work unimpeded on humanitarian aid.

The World Bank and the IMF, both of which have funds that have been locked since the Taliban took power, will also attend.

Qatar, which has played a vital role as a hub for refugees fleeing the country has been invited, and discussions are likely on the opening up of Kabul airport.

In his speech to the UN general assembly in September, Draghi criticised the Taliban, saying the composition of Afghanistan’s new executive did not meet the international community’s expectations on inclusivity and representation.

It is expected that neither the Chinese president, Xi Jinping, nor his Russian counterpart, Vladimir Putin, will participate in the video call, leaving the task to their foreign ministers. Boris Johnson is on holiday in Marbella, but was involved in work calls with world leaders on Monday.

Ahead of the summit and speaking in Doha, Afghanistan’s foreign minister appealed to the world for good relations but avoided making firm commitments on girls’ education despite international demands to allow all Afghan children to go back to school.

“The international community needs to start cooperating with us,” the acting foreign minister, Amir Khan Muttaqi, said at an event organised by the Center for Conflict and Humanitarian Studies at the Doha Institute for Graduate Studies.

Calling for the world to release $9bn-worth of frozen Afghan assets held overseas, Muttaqi said “The Daesh issue has been controlled by the Islamic Emirate very well so far,” he said adding that international pressure on the government was helping Islamic State’s morale. “Instead of pressure, the world should cooperate with us.”