Why do parents reject to go back to the office? - iWONDER 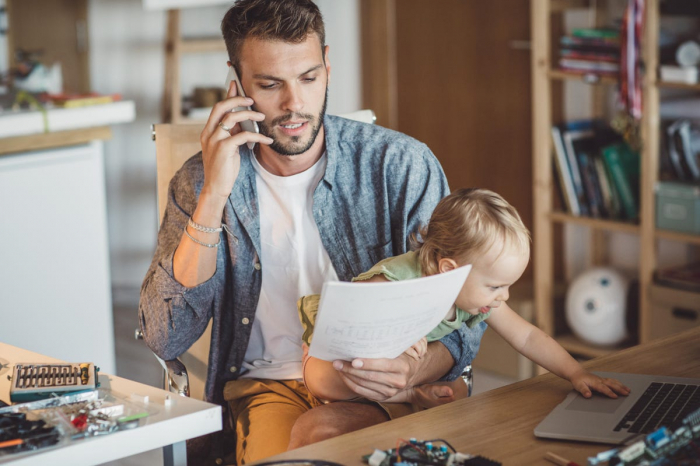 Some companies want workers back in the office. But parents, who combined remote work with spending more time with their children, are not happy.

For Ellen, a 36-year-old mother-of-one living in Westchester County, north of New York City, an article that appeared online in May 2021 changed everything. That week, one of the most powerful men in the finance industry told a conference that remote working didn’t work for “those who want to hustle”, and signalled his intent to bring employees back to the office.

Ellen, who had spent her entire career working on Wall Street, almost choked on her coffee. “During the previous 18 months, I’d spent every single waking hour of the day doing nothing but hustle,” she explains. She was worried by what the comments implied for workers in her industry. “I didn’t want to go back to the office. I’d come to love working from home. I’d proved that it could work, and I didn’t want it to change.”

But it did. In the weeks that followed, a handful of major financial-services companies, including Ellen’s employer, called time on allowing employees to choose where to work.

Before the pandemic, Ellen had rarely seen her three-year-old son during the week. But since Covid-19 hit, she had become accustomed to having lunch with him and being around for bath and bedtime – which meant readjusting to office working was “devastating”. “Through all the pain of the pandemic, the one huge upside was that I’d had a chance to really bond with him,” she says of her son. “I was working, and we have a nanny, but I was at home and the opportunity to hang out with him between Zoom meetings and calls was priceless.”

For years, parents have been calling for more autonomy to decide where and when they work, and to construct their working week around opportunities to care for their children. In March 2020, the pandemic granted those requests for many, as people were sent home to do their jobs. But now, amid signs the pandemic may be coming under control, and as a cautious transition back to pre-pandemic habits gathers pace, many employers are asking employees to come back into the office full time.

Generally, workers are split on how they feel about going back in person. Some applaud the social advantages of being back in the office, while others are recoiling at the prospect. But parents are fighting back particularly hard, especially those who work long hours.

Workplace experts – as well as the parents themselves – are warning employees now greater flexibility is possible; more than that, they’ve proved they can do their jobs outside the office. That means if employers can’t accommodate parents’ desire to spend more time with their children, they risk a talent drain as workers seek out new roles at firms that can.

Beyond banking, one industry where the kick-back from parents has been particularly fierce is the legal world. Robert, a 43-year-old lawyer from the north of England, has a five-year-old son who is autistic.

“When hearings went from being in person to being video calls, it meant that I was able to cut out all of my travel and spent much more time with my family,” he explains. “I was able to support my wife, be a better husband and better father – particularly in the context of all the personal problems that having a child with special needs brings. Our whole family dynamic and bond was strengthened during the period, and [now that things are going back to in-person] I’m just really scared of that changing back and slipping away.”

Robert says that for financial and other reasons he’s not thinking about changing jobs any time soon, but says that many lawyers he’s spoken to, most notably young parents, are thinking about quitting due to the personal cost of going back to the old way of working.

According to a May 2020 survey by PwC, parents of children under the age of 18 were more reluctant to return to the workplace than non-parents, and of all respondents who said they were hesitant to go back, more than a fifth cited their responsibilities as a parent or caregiver. Additional PwC research in January 2021 showed that more than half of employees would prefer to be remote at least three days a week once pandemic concerns subside.

Dan Cable, professor of organisational behaviour at London Business School, explains that in many cases, what’s frustrating so many people is that during the past 18 months, we’ve demonstrated just how well we can work remotely.

“Because we now know it often is possible [to work from home], it highlights the ‘wasted hours’ commuting and putting in face time in the office,” says Cable. “Highlighting this is probably most painful for those that work the most hours, since it puts a real premium on the conflict between, say work and family, or work and fitness, which people are able to balance better when saving the commute time and reinvesting it in these other activities.”

Sarah Russell, an employment lawyer at Fox Whitfield, based in Manchester, UK, cites a recent case suggesting that there is momentum building in the push by parents for more flexible work.

In September, Alice Thompson, a UK estate agent, made headlines when she won an £185,000 ($254,478) pay-out from her former employer, who had denied her request for flexible working hours to pick up her daughter from nursery. Thompson quit in December 2019 after her boss refused the request, according to an employment tribunal.

Russell says even though that case didn’t relate specifically to working from home or Covid-19, employers grappling with how to design the post-pandemic workplace should consider it a cautionary tale. “Arguing that there is a real business need for full-time office-based work will be very hard when many businesses have managed with staff full-time from home for 18 months without any apparent damage to their bottom line or reduced productivity,” she says.

But even where forcing everyone back into the office full time does not lead to immediate legal action, “it will lead to working parents voting with their feet”, she adds, particularly women. “Law firms have typically been recruiting 50:50 [women and men] at graduate entry level, but they’re reducing their pipeline of potential partners when large numbers of staff exit after maternity leave, because the working practices are incompatible with family life. Employers need to take a longer-term view.”

Asked about what companies can do to avoid a talent exodus linked to a disgruntled workforce or an exacerbation of gender inequality, Russell points to the model implemented by Baker McKenzie, the multinational law firm headquartered in Chicago, Illinois, and a handful of other legal companies.

Baker McKenzie has mandated a minimum of two days and a maximum of three days a week in the office for all UK workers. The idea behind doing so is to provide parents and caregivers with some of the flexibility they have become accustomed to during the pandemic, while also safeguarding against some of the potential downsides of a fully hybrid setup.

“This should help to prevent the outcome where men go back full-time and are visibly working long hours, whilst working mothers put in just as many hours at home, but aren’t physically in the room so the male employees bag the overwhelming share of the informal opportunities, promotion and bonuses,” explains Russell.

Finding a way forward is important, because there is already plenty of evidence that employees who feel that their companies aren’t accommodating their needs are willing to resign.  A recent survey from job-search site FlexJobs showed 58% of people who had been working remotely during the pandemic said that they would “absolutely” look for a new job if their employer did not allow them to continue working remotely.

Julia Lamm, a partner within PwC’s Financial Services People and Organisation practice, says there’s a real risk that anxieties parents feel about going back into the office – including the fear that commuting parents could bring the virus home to their children – could feed into what’s become known as the ‘Great Resignation’ if employers don’t manage them effectively.

“There’s not one answer that works for everybody,” she says, when asked what employers should be doing to prevent parents from quitting. “But there’s power in looking at the work that each individual does on a day-to-day basis and deciding based on that what work arrangement is best for each person.”

In a sign that some employers are catching on to the fact that workplaces can’t simply go back to exactly how they were pre-pandemic, postings for entirely remote positions have rocketed during the past 18 months, according to data from LinkedIn.

For people like Ellen and Robert, however, this offers little comfort. Robert says that the legal profession presents a unique set of challenges when it comes to re-evaluating the parameters of how we work: much of the work associated with criminal trials, for example, can’t be done remotely because of safety and logistical concerns.

Ellen, meanwhile, says that it’s “unthinkable” that an industry like banking, in which so much value is still placed on face time, will change its culture and become significantly more flexible in the immediate future. But eventually, she says, it might have to.

“There are other industries, like tech, that are embracing at least some elements of the pandemic ways of working,” she says. As early as May 2020, Twitter announced its employees would be allowed to work from home forever. Ellen says there’s no real reason why bankers would not start looking for opportunities in other industries if they’re unhappy.