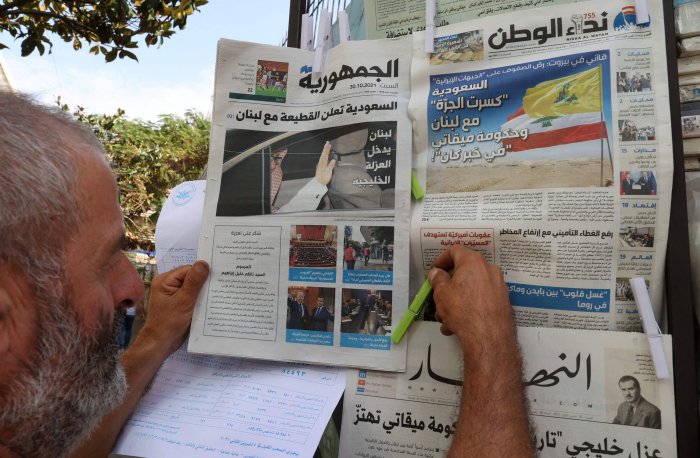 The United Arab Emirates (UAE) became the latest Gulf nation that followed in the footsteps of Saudi Arabia to withdraw its diplomats from Beirut amid an ongoing row over a Lebanese minister's critical comments over the Saudi-led military intervention in Yemen.

Earlier Saturday, Kuwait ordered the Lebanese charge d’affaires to leave the emirate within two days and also recalled its ambassador from Beirut. Kuwait's foreign ministry said the expulsion and recall were based on the "failure" of the Lebanese government to "address the unacceptable and reprehensible statements against the sisterly Kingdom of Saudi Arabia and the rest" of the Gulf Cooperation Council (GCC) countries. The GCC is a six-member regional body that comprises Saudi Arabia, Kuwait, the UAE, Oman and Qatar.

Lebanese Information Minister George Kordahi had described during a TV program in August the war in Yemen as an aggression by Saudi Arabia and the UAE. He added that the war in Yemen is "absurd” and must stop because he is opposed to wars between Arabs.

Yemen has been convulsed by civil war since 2014, when the Iran-backed Houthi rebels captured the capital, Sanaa, and much of the north of the country. That forced the internationally recognized government to flee to the south, then to Saudi Arabia. A Saudi-led coalition entered the war in March 2015, backed by the United States, to try to restore the government to power. Despite a relentless air campaign and ground fighting, the war has deteriorated largely into a stalemate and spawned the world’s worst humanitarian crisis.

In the recording that resurfaced Monday, Kordahi said Yemen's Houthi rebels were "defending themselves ... against an external aggression," adding that "homes, villages, funerals and weddings were being bombed" by the Saudi-led coalition. The Houthis are backed by Saudi Arabia's regional rival Iran, which also wields significant influence in Lebanon, due to its strong backing of Shiite group Hezbollah.

Trying to resolve the issue without further damage, President Michel Aoun said Saturday in a tweet that Lebanon is keen on having the best relations with the Saudis and on strengthening links via bilateral deals. On Friday night, Prime Minister Najib Mikati and Aoun discussed the Saudi decision and asked Kordahi to make the "appropriate decision,” an apparent call for him to resign in hopes it will ease the tension.

The row has also spurred calls by some top Lebanese politicians for the resignation of Kordahi, while others opposed such a move, which could undermine the government as a whole. "Enough of catastrophes. Sack this minister who will destroy our relations with the Arab Gulf before it is too late," Lebanon's Druze leader Walid Jumblatt said on Twitter.

Following a near three-hour ministerial crisis meeting Saturday, Education Minister Abbas Halabi said the government could not afford to resign over the diplomatic dispute. "The country cannot be left without a government," due to other pressing matters, and would continue to work to resolve the rift, Halabi said.

Kordahi's resignation would have knock-on effects that could threaten Mikati's coalition government, tasked with addressing a financial crisis dubbed by the World Bank as one of the worst in modern history. Foreign Minister Abdallah Bouhabib said Mikati's contacts with officials from a number of states showed opposition to the resignation of the government, formed only last month after a 13-month stalemate.

"They told Mikati, 'if you are thinking about resignation, take that out of your head,'" he said.

Richard Michaels, deputy head of the U.S. mission in Lebanon, had joined the crisis meeting in Beirut, a U.S. Embassy spokesperson said, declining to comment further.

In Cairo, Arab League Secretary General Ahmed Aboul-Gheit said the crisis caused by Kordahi’s comments has led to a "great setback” to Lebanon’s relationship with the Gulf countries. He urged Aoun and Mikati to take "necessary steps” to ease the tension, especially with Saudi Arabia. He did not elaborate which steps should be taken.

Aboul-Gheit also called on Gulf officials to review measures that could have negative consequences on Lebanon’s already battered economy.

Kordahi, a former TV show host, made the comments on a TV program before he was chosen for the post in September. He has been publicly backed by the Iran-backed Hezbollah armed group and has declined to apologize or resign over the comments, which have dealt the worst blow to Saudi-Lebanese relations since Saad al-Hariri's 2017 detention in Riyadh.

The minister's political patron, Suleiman Frangieh of the Hezbollah-allied Marada Movement, told a news conference he had refused an offer by Kordahi to resign and would not name a successor to him should he do so.

Yet a group of former Lebanese prime ministers called on Saturday for Kordahi to resign, saying his comments had inflicted a strong blow to relations with Gulf Arab nations. Fouad Seniora, Hariri and Tammam Sallam, some of the country's top pro-Saudi politicians, said in the statement that Kordahi's remarks "harmed Lebanon's supreme national interest."

If Kordahi resigns, ministers backed by Hezbollah and its Amal ally could follow suit at a time when the government is already paralyzed by a dispute over an inquiry into the August 2020 explosion that devastated parts of Beirut.

A senior political source told Reuters that the U.S. and European nations were in contact with Lebanese officials to prevent the government from falling and there were no immediate indications any ministers would resign.

Mikati has been hoping to improve ties with Gulf Arab states strained for years because of the influence wielded in Beirut by Hezbollah. Ali Shihabi, a Saudi analyst, said the latest row was rooted in Saudi concern over Hezbollah's growing grip on Lebanon despite huge Saudi financial support and hundreds of millions of Lebanese working in the Gulf.

"Kordahi's statement stung particularly hard since his career was made with Saudi-owned media ... but this is bigger than just him," he said.

Saudi Arabia had already in April banned all fruit and vegetable imports from Lebanon, blaming an increase in drug smuggling that it said Lebanon had failed to address, a ban now extended to all goods. Kuwait's decision was also based on the Lebanese government's "failure ... to deter the continuous and increasing smuggling operations of the scourge of drugs to Kuwait and the rest of the GCC."

In its statement Friday, Saudi Arabia also referred to Lebanon's failure to "stop the export of the scourge of drugs ... to the kingdom, especially in light of the terrorist Hezbollah's control of all ports."

Saudi Arabia announced in June that it had confiscated thousands of Captagon pills hidden in a shipment of fruit from Lebanon. Captagon, a drug popular among fighters in war zones, usually blends amphetamines, caffeine and other substances in pill form.

Amid the crisis, Houthi rebels have also threatened to block the entry of Saudi products into Yemen. "If Saudi Arabia bans Lebanon's products because of the position of the Lebanese information minister, I call on the (Houthi) government to ban the Saudi products into Yemen," the head of Houthi Supreme Revolutionary Committee, Muhammad Ali al-Houthi, said on Twitter.