The parents who track their children - iWONDER 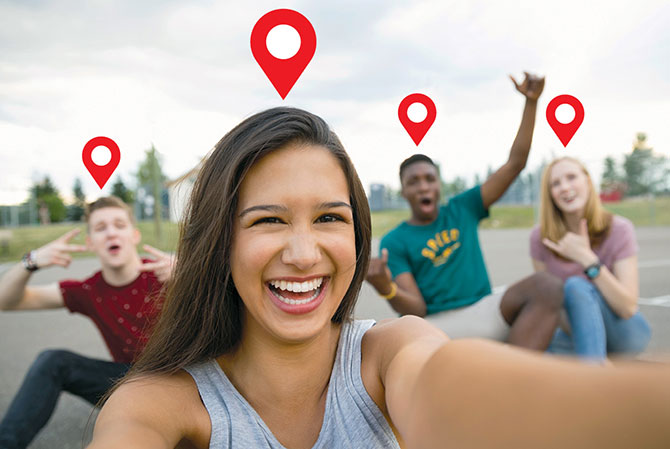 Child-tracking apps are growing. Although they help parents keep tabs, are they hurting families in in exchange for peace of mind?

Elaine Spector was anxious to hear whether her son had safely gotten back to his dorm in Texas, after a recent visit home. But rather than waiting for him to call or text, the Baltimore, US-based mum was carrying on with her day, and awaiting a reassuring ding from her phone.

That’s because, like 32 million people around the world, Spector and her whole family have Life360 installed on their phones. The app keeps constant tabs on the whereabouts of her three children, letting her know when they’re on the move, when they’re safely home, if they’re somewhere they shouldn’t be and a whole host of other data. “They got to school, ding. They got home, ding,” says Spector, a patent attorney. “It’s just a way for us to know as a family where everybody is.”

The family have used the app for several years now, and Spector says while her younger children tend to turn off their locations at times, her oldest son has always been relaxed about using it. But even though he is now 18 and living across the country, she admits the idea of him removing the app and taking away those reassuring dings “makes me feel stressed”. “I don’t want to be the helicopter parent, but we’ve had this for a while, and there’s a part of me that’s hesitant to totally cut it off,” she says. “I like this subtle part of, ‘he’s safe and I don’t need to pester him’.”

Family-tracking apps have exploded in popularity over the past decade or so. A parent’s natural instinct to protect their children is a component of growth, of course – but these apps keep booming as many parents feel the world – both off and online – is inherently and increasingly dangerous.

Yet experts say parents wanting to use them should think very hard about how they’’ll do so, and how they’ll talk to their children about them. Apps are becoming ever more sophisticated in the data they're gathering, raising questions about personal security. And children raised being app-monitored are now reaching adulthood, leaving the parents with the quandary – when do you turn them off?

While Life360 dominates the family tracking market – it’s currently the sixth most downloaded social media app on the iOS App store in both the UK and US – there is a vast array of software available, all offering parents varying degrees of monitoring.

Ghislaine Bombusa, head of digital at UK-based Internet Matters, which advises parents on internet safety, says there are essentially two types of tracking options. The choice between the two “depends on your type of parenting, in terms of how closely you want to monitor your child”.

The simplest are location-sharing apps, which come installed on phones like Find My Friends on iOS devices, or Google Family for Android. There are also third-party apps that enable users to gather a seemingly limitless range of data from connected phones.

At the basic end, this includes features such as geofencing, so an alert is sent when a phone leaves or enters a certain area. For parents with teen drivers, there’s also speed monitoring and crash detection – something Spector says she has found particularly useful. On the more extreme end of the market, apps like FindMyKids allow a parent to remotely activate the microphone on their child’s phone and even record audio, while TeenSafe boasts a “stealth mode” which, says the company, means the child will “never find out that their parents are tracking them”.

Beyond physical tracking, apps can also manage a child's digital life, “whether it's what they're spending if you’ve got an allowance online, how they use gaming consoles, when they’re using it”, says Bombusa. Apps like OurPact allow a parent to see screenshots of their child’s online interactions, while Bark actually scans their messages to alert parents to “concerning interactions”.

While Bombusa doesn’t believe all parents are now using such apps, she says their proliferation and the amount of investment in them is certainly indicative of high demand. One 2019 survey of parents and guardians in the UK found that 40% were using some kind of GPS tracking on a daily basis.

And they are big business. Life360 alone has been valued at over $1bn, and operates in more than 140 countries. While many apps do have free options, most also offer the option of upgrading to paid accounts for additional features or to connect more devices. Circle for example, which monitors internet use, starts at $9.99 (£7.39) a month, and TeensSafe’s five-device plan is currently $99.99 a month.

Location tracking apps market themselves as essential parenting tools in a world full of danger. They rely on parents believing that as long as they know where their child is, they will be safer, or that kids will steer clear of risky behaviour if they know they're being watched. And there have certainly been cases in which parents have used tracking apps to find teenagers who have had an accident, or even been abducted.

But Sonia Livingstone, a professor in the department of media and communications at the London School of Economics and Political Science, believes there is in fact “zero evidence that any of these apps keep children safer”. "I’ve never seen any and I look at all the evidence,” she says.

As an expert in children’s digital rights and safety, who has written several books about parenting in the digital age, Livingstone feels the extensive adoption of tracking apps is an understandable response to constant headlines about the “terrible dangers to our children”. But she argues that in the longer term, tracking apps can have "unintended but also damaging consequences", not least to the parent-child relationship.

App makers and advertisers may be keen to make parents believe getting an app is an act of parental love, she says, but "the most important thing for development is that the child learns to trust the parent and the parents the child”. Relying on an app to find out where a child is or what they are looking at online, particularly without their knowledge, can seriously undermine that trust, she says, which might lead children to make riskier choices or get clever about evading detection. As well as the right to be safe, children do also have a right to privacy, particularly as they get older, says Livingstone.

You certainly don’t have to look far to find teenagers – and even older individuals – who feel their parents are encroaching on those rights, or are unwilling to let go of the digital reins. Particularly, Reddit is full of stories about young people who feel constrained by their parents’ anxious remote monitoring.

One recent post in the Insane Parents subreddit read: “My mom saw my location was turned off in Life360 and threatened to turn off my phone and also told me that I can’t drive the car anymore… Oh did I also mention that I’m 20 years old???” Another in the Life360 subreddit, where users swap tips on how to evade monitoring, said they were 19, but their mum paid for their phone so was making them download the app. “I'm literally home all the time unless I'm at class, which she drives me to and from. Why does she feel the need to track my location when I'm only ever at two places?”

Livingstone says there is indeed a real risk that parental monitoring “moves from being intrusive to abusive”. She argues it is “crucial to our autonomy and our personal integrity not to have our every private thought observed. That’s what private means.”

An additional key concern for Livingstone is the “scary” amount of data that the tech companies behind these apps collect. While Life360 says it gives users “full control and transparency” over their information and that settings can be tweaked depending on individual’s preferences, many apps are quite open about sharing data with places like insurance companies. Livingstone believes there is a troubling lack of understanding, even among experts, about how data is used, or how it might be used in the future.

Spector says she isn’t worried “at all” about data collection, and believes the advantages far outweigh any concerns in that area. But Livingstone says parents need to think hard about not just the immediate risks, but how technology might develop over the next decade. Data gathered on a seven-year-old today could, theoretically, be fed into some “brilliant algorithm" in the future, which discriminates against them based on their historic movements.

“No-one is looking forward in that way, so I think parents should really think very carefully about giving that access to anybody.”

If a parent does feel an app is the right approach for them, however, there are ways to minimise the risks Livingstone highlights.

Bombusa says it’s essential that using an app is something parents and children do together, after an open conversation, and that the child knows it is not replacing their proper, trusting relationship. Make sure each party knows what the technology will do, why you want it, what boundaries you are setting and crucially, how the child is feeling about it, she adds. It’s also vital to adapt the use of the apps over time, as a child grows and needs more independence.

“I think it’s about the behaviour your child is showing. If they used it when they first got the phone and they followed the rules… there’s possibly a conversation about relinquishing some of those tracking devices. Or maybe saying, ‘OK, I’ll only track it when I feel like there’s a concern’, rather than all the time.”

Livingstone, however, worries that there are simply too many unknowns around what tracking apps are doing to children and their development to recommend their use. “We just don't know what it will be like for this generation of children to grow up in a world in which they’ve always been watched, always been tracked and never got lost and had to recover themselves,” she says. “I really do respect parents’ anxiety that leads them to think this could be a solution, and I really invite them to find a different one.”

Spector is proud her family has the kind of “open dialogue” recommended by Bombusa, so she's never had to “police” her children's activities. But she admits it would be very hard to give up those regular dings from Life360, and the peace of mind she feels from being able to see where her children are. “I don’t think addicted is an inaccurate word, because I think about not having it and I feel it makes me feel stressed,” she says.

Her oldest son is still happy to have the app for now, “because he knows I’m not stalking him or checking up on him”, she says. But she knows the time is coming when she'll lose the dings. “He would tell me if he didn’t want it and I would respect that. It would be hard, but it wouldn’t be the first hard thing we’d had to do as parents.”