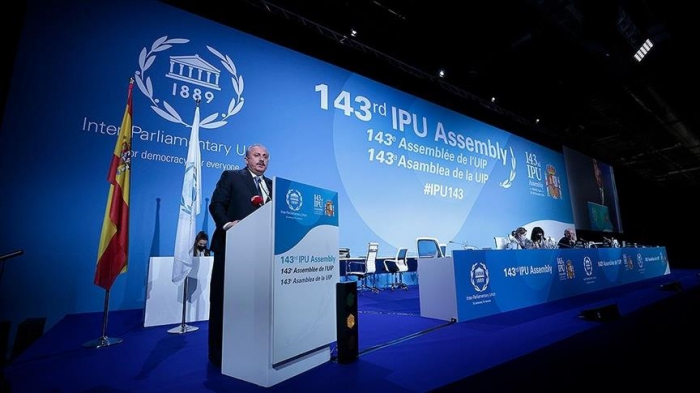 The speaker of Turkey's parliament accused France of hypocrisy on Sunday after it barred a campaign launched by the Council of Europe against anti-Muslim hate speech, AzVision.az reports citing Anadolu Agency.

Speaking at the 143rd Assembly of the Inter-Parliamentary Union (IPU) in Spain, Mustafa Sentop criticized France for vetoing a campaign launched by the Council of Europe against anti-Muslim hate speech.

"We have to expose this hypocrisy," Sentop said, pointing out that France opposed the campaign despite having a significant domestic Muslim population.

"Turkey will always stand by all the oppressed, aggrieved communities and people, whether or not they're Muslim," he added.

Emphasizing that populism is jeopardizing democracy and human rights, Sentop said: "The Inclusion and Anti-Discrimination Division of the Council of Europe launched a very valuable campaign within the framework of combating discrimination against women wearing headscarves."

"This initiative, which deserves appreciation for the protection and advancement of human rights, which is the basis of the Council of Europe, was unfortunately terminated after the reactions of some politicians in France, which hosted the council," he said.

Sentop pointed out that discrimination and xenophobia have increased over the last 20 years, adding that hostility towards Islam, in particular, has reached dangerous levels all over the world.

"Unfortunately, the international community and institutions remain tone-deaf and ineffective against this desperate situation," he said.

The Council of Europe launched the campaign against the discrimination of women wearing headscarves on Oct. 28.

Images of women wearing headscarves were shared on the Twitter account of the Inclusion and Anti-Discrimination Division, with the slogans "Freedom is in the headscarf," "Bring joy & accept hijabs" and "Beauty is in diversity as freedom is in the hijab."