Ambassador Extraordinary and Plenipotentiary of the Republic of Belarus to the Republic of Azerbaijan Andrei Ravkov has given an interview about the situation on the border between Belarus and the EU countries to Vzglyad.az.

- Andrei Alekseyevich, how do you evaluate the situation with migrants on the western border of Belarus? Who is responsible for the migration crisis?

- I would like to start with the fact that the situation with migrants on our western border didn't arise because of the fault of Belarus or with the participation of Belarus. Obviously, people leave their homes in disrupted and war-torn countries in search of a better future. It is also blatant that it was not Belarus that forced them to take this step, but the incogitant policy of Western states that disentangled wars and conflicts in the countries of origin of migrants. Having a share in the current situation on the border, the EU decided to freeze financing in our country for all joint projects to strengthen and manage borders, create and modernize centers for holding illegal migrants and asylum seekers. Due to the numerous imposed economic sanctions, the Belarusian side is not able to single-handedly ensure border protection and restrain the increased flow of migrants.

- But as far as we know, Belarus humanly approached thousands of migrants, temporarily settling them in the logistics center and providing them with clothes, food, medical care and so on, since there are many women and children among them … You are absolutely right. We do not have any problems regarding the provision of humanitarian aid to migrants. Belarusian state bodies, volunteers and the Red Cross ensure the purchase and distribution of necessary things and products. Timely medical assistance is also provided to all those in need. Ordinary Belarusians, who are not indifferent to the misfortune of others, assist them as much as they can.

In addition, Belarus has given international structures an access to migrants at the border from its territory and continues to cooperate with the UN High Commissioner for Refugees, the International Organization for Migration and UNICEF. Besides, the  Humanitarian Aid Mission of the European Commission, which visited Belarus on November 23-24, became satisfied with only simple monitoring, without even bothering to talk to migrants. In this context, Poland clearly stands out, which completely closed access to border areas for humanitarian and human rights organizations, as well as for the public and the media. They obviously have something to hide.

- In your opinion, what do they hide? 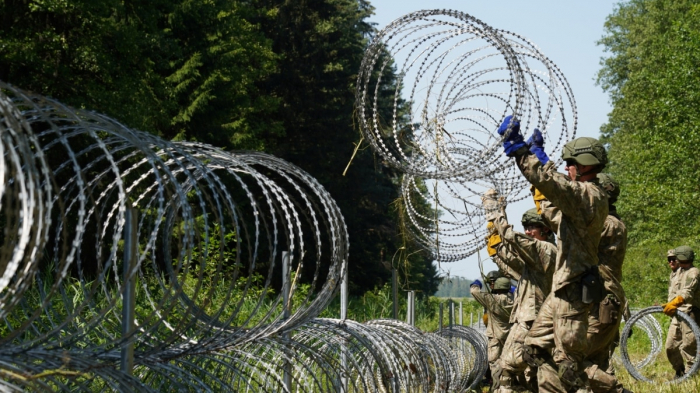 - The high-powered authorities of Belarus have registered numerous facts of inhuman treatment of people, who seek asylum in Poland, Lithuania and Latvia. In response, they were beaten, poisoned with gas, chased by dogs, and then thrown half-dead across the border to Belarusian territory. Perhaps, it is the true face of European democratic values ​​and the blatant observance of human rights that the EU states try to dictate to the whole world ?! For evidence, you can familiarize yourself with factual materials and the brochure "Crimes of Poland and Lithuania against refugees: facts and evidence" prepared by the Belarusian society "Знание", the Publishing House "Беларусь сегодня" and the Public Association "Belarusian Union of Journalists ”, which is posted on the website of the Embassy.

The prosecutor's office of Belarus has opened a criminal case on the fact of the use of special equipment, including flash-noise grenades, tear gas, as well as water cannons with chemical substances, that were dangerous to life and health by the Polish side against migrants, who were on the border territory from Belarus,

Blaming Belarus, the EU countries, especially Poland, Lithuania and Latvia, are trying to hide their crimes against migrants and refugees. Thus, they seek to justify the further tightening of the EU's migration policy, as well as revise approaches to asylum on the quite.

Thus, the countries of the European Union and, first of all, our three western neighbors often violate international humanitarian law, the rights of migrants and the provisions of the 1951 Refugee Convention.

Thoughtless labeling, pressure and blackmail from European partners are issues, that we are dealing with today.

- Not so long ago, Angela Merkel spoke with President Alexander Lukashenko twice. Seemingly, a light has dawned at the end of the tunnel on the issue of a civilized settlement of the migration crisis on the border with Belarus. However, the determination of the West failed: for migrants, who had gathered on Belarusian territory, the corridor to Germany, where they all aim for, has never been opened. However, NATO started another wave of saber-rattling. How does Belarus respond to all this? - Above all, Belarus appreciates peace and stability both in the country and the region. Throughout the history of the existence of the independent Belarus, we have been a donor of security in the region and have spared no effort to ensure global peace and prosperity.

Illegal migration is a common challenge, which can only be resisted by joint efforts without building walls, imposing sanctions and closing the airspace, etc. However, this approach requires mutual constructive steps.

Despite the belligerent rhetoric of the EU and NATO, Belarus is ready to work with all international partners by putting aside political differences to prevent further expansion of the migration crisis and save lives. We are deeply convinced that this difficult situation cannot be settled through persistent groundless attempts by the West to “demonize” Belarus, but through joint work and dialogue. We must struggle with the origin of  migration flows and sit down at the negotiating table, for which we have repeatedly called on the West.