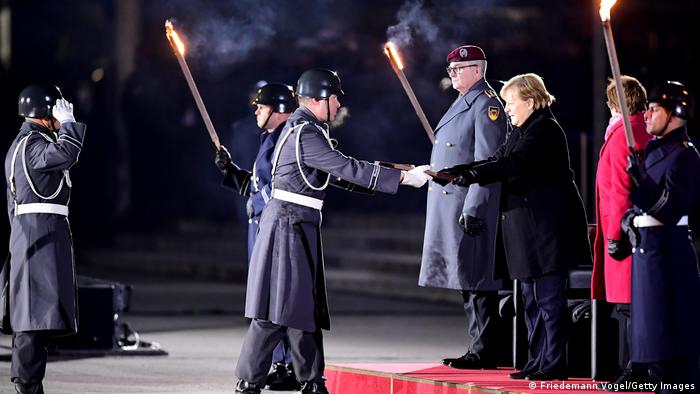 Germany's military honored Chancellor Angela Merkel with their highest ceremony for a civilian on Thursday, complete with an eclectic mix of music personally selected by the outgoing leader and punctuated by an emotional speech.

During the "Großer Zapfenstreich," or the Grand Tattoo ceremony -- which was pared back due to the Covid-19 pandemic -- members of the armed forces played a 1960s song that includes the words "I can't acquiesce, can't make do, I still want to win," and the song "You Forgot The Color Film," which was first performed by East German punk artist Nina Hagen, Reuters reported.

Merkel is due to officially step down next week after 16 years in office. She will be succeeded by Social Democrat Olaf Scholz, who is expected to be sworn in as chancellor after lawmakers give him the final green light.

In a heartfelt speech at the ceremony in Berlin, Merkel said that her time in power had "challenged" her both politically and personally.

"But at the same time, it was a deeply satisfying position," she said.

She also thanked frontline workers for their efforts throughout the Covid-19 pandemic, and applauded the country's ability to engage in constructive pro-democratic discourse throughout the last two years.

''Our democracy lives from the capacity to engage critically with the ideas and to correct its path and it lives from balancing out the respect that we have for one another and for the interest we have for one another -- based on solidarity, and trust -- and also trusting in facts and trusting that wherever scientific understanding is denied and conspiracy theories are pursued and incitement to hatred is pursued. ''

Merkel also said that the pandemic has demonstrated "just how important trust in politicians, in science and in public discourse and society is. But also just how fragile those things can be."

She concluded her speech saying that it was now down to the next government ''to find answers that challenge us," and wished her successor the very best in leading Germany into the future.

Merkel, 67, grew up under Communism in East Germany, and trained as a scientist, earning a doctorate in quantum chemistry before making a move into politics following the fall of the Berlin Wall. She won a seat in the Bundestag, Germany's parliament, in the first election after reunification.

She has navigated Germany and Europe through multiple crises over her tenure and has been hailed as a champion of liberal values and a stalwart of democratic values by supporters.

But while Merkel is seen as a bold and accomplished crisis manager, critics say she risked alienating the conservative voter base of her own party, the CDU, by taking left-of-center positions on key topics including nuclear energy, foreign policy and immigration.