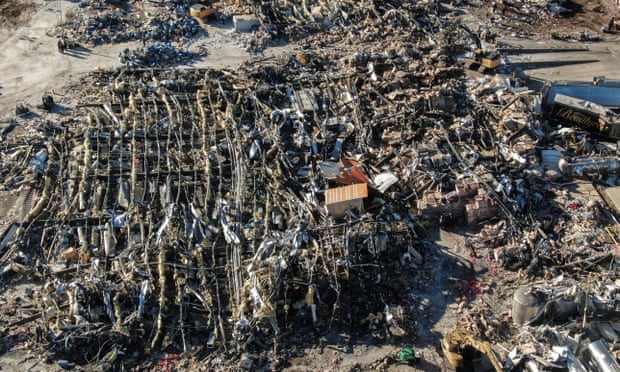 U.S. President Joe Biden on Sunday declared a major federal disaster in Kentucky after a swarm of deadly tornadoes hit the state on Friday, paving the way for additional federal aid, the White House said in a statement.

As part of the declaration, federal aid will be provided to affected individuals in the counties of Caldwell, Fulton, Graves, Hopkins, Marshall, Muhlenberg, Taylor, and Warren, the statement said.

It follows a formal request from Kentucky governor Andy Beshear who said the tornadoes were the most destructive in the state’s history.

Beshear had initially said the death toll could exceed 100 after twisters tore through the US midwest and south on Friday night.

Dozens of people in several counties in the state are still believed to have died in the storms, but Beshear said on Sunday afternoon the death toll might be as low as 50, according to the Associated Press.

“We are praying that maybe original estimates of those we have lost were wrong. If so, it’s going to be pretty wonderful,” the governor said.

Among the 110 people who were at the candle factory, eight have been confirmed dead and eight others remained missing, said Bob Ferguson, a spokesperson for Mayfield Consumer Products, which owns the factory. He said 90 people had been located, a figure that authorities were trying to confirm.