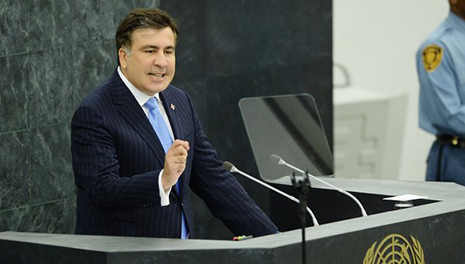 Russia does not want for anyone to win the Nagorno-Karabakh conflict.
Its objective is the conflict itself, since it does not allow nations to become independent and it bars them from joining the EU.

Georgian President Mikheil Saakashvili stated the aforesaid in his final address, as President, to the UN General Assembly.

Saakashvili noted that Russia cannot afford to have strong states—that is, the former Soviet republics of Ukraine, Moldova, Armenia, and Azerbaijan.

“Do you think that [Russian President Vladimir] Putin wants for Armenia to win in the conflict against Azerbaijan? No. This will make Armenia very strong and more independent. Or, do you think that Moscow wants Baku to defeat Yerevan? No. They do not want anyone to win; their objective is the conflict itself,” he said.

As per the Georgian president, the conquered nations should come together and not show their weakness.

“Unity should be our law in Eastern Europe, including in the Caucasus,” Voice of America quotes Mikheil Saakashvili as saying.