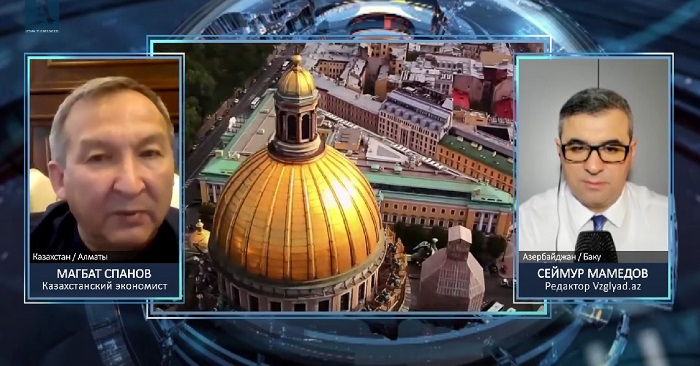 Expert of Institute of World Economics and Politics, doctor of economic sciences, professor Magbat Spanov spoke about problems in the global food supply, causes, and possible solutions in his interview to AzVision.az.

- Today, many experts, leading international organizations, politicians and governments agitate that the world is on the doorstep of a global food crisis. Food prices rise everywhere and some countries even face food deficiency. When did the process of food price spikes start in the world? And what factors affect the rise in food prices?

-Obviously, the global price increase started as a consequence of the pandemic, closure of borders, and supply chain breaks. Many countries entered lockdown,food prices rose. The pandemic has seen many people lose their jobs. As a matter of course, the less you work, the less product is produced. Indeed this process started in 2020.

- To what extent is the world food system affected by the Russian-Ukrainian conflict and the West's Economic War?

- The Russian economy was 6th among the world's countries and 2nd among European countries in terms of GDP, estimated at $ 4.097 trillion in 2020, according to the PPP (Purchasing Power Parity) index. In terms of nominal GDP ($ 1.7 trillion in 2020), Russia ranks 11th in the world and 5th in Europe (according to data from the World Bank). After the sanctions imposed in 2014, Russa started to pay great attention to agricultural development. Today Russia is the world's largest wheat exporter. In brief, the Russians have regained the positions that they once lost during Tsarist Russia 100 years ago. At that time, Russia was a food supplier to many European countries.

We also need to consider that Ukraine was once the "bread and butter" of the USSR. Agriculture was well-developed there and continues to develop today. If we look at the figures, ratios are different in various sources. However, these two countries supply about 30% of the wheat to global markets. That is the first point.

Second point is that the CIS countries mainly use sunflower oil.

These countries are world leaders in the supply of rapeseed oil and account for 52% of the sunflower oil market. Russia is a world leader in the market of highly concentrated mineral fertilizers. The Russian-Ukrainian conflict is disrupting traditional supply routes, emphasizing the need for logistics flexibility in the design of global supply chains. And consequently, there is a definite shortage and a sharp rise in prices. For instance, vegetable oil prices have grown by 30% in many places, and wheat prices by $ 300 per ton. The new wave of price-rise for wheat and vegetable oil due to the Russian-Ukrainian war may subside only after the end of this conflict.

-  Yes, it is true. The prices started to rise after the pandemic before the war. However, in theory, there are soil resources and reserves that can feed only a definite number of people. Considering decreasing productivity, the amount of product produced also declines. There is a shortage of goods. And consequently, prices start to grow.

Besides, the inflation factor also must be taken into consideration. The reason is that when we move away from the narrow system framework, we also move away from the gold value of the currency, and many countries start to issue this money. For example, during the crisis of 2008 and 2012, when quantitative easing (QE) was adopted, the U.S printed an additional $ 2-3 trillion in the first quarter. This money supply, which is not provided with anything except the cost of printing dollars or euros, enters the market.

- Which country among importers of wheat from Russia and Ukraine has suffered or will suffer mostly?

- If we consider the relation of the logistics with the Black Sea, it becomes clear that the nearest route is to eastern Arabia, but it will also affect Turkey and even Armenia to some extent. Regarding productiveness, I remember that during the meeting of Presidents - Nazarbayev, Yanukovych, and Putin, the proposal was made on the establishment of a Wheat Union within OPEC, so that our countries could export wheat following the agreement. At that time, Ukraine produced 20-30 million tons of wheat, now this figure is equal to 80 million tons. The production rate in Kazakhstan varies from 12 to 24 million tons depending on weather conditions. Ukraine has significantly increased its share of the world wheat market, while Kazakhstan has remained at the same level. As the population grows, so does consumption. Wheat is not as expensive as meat, and wheat consumption exceeds its supply (production). Therefore, often it is simply not enough. However, the Middle East and some Southeast Asian countries will suffer greatly.

- Can Kazakhstan replace Ukraine in terms of wheat supplies to countries in need? Does Kazakhstan intend to increase wheat and sunflower oil exports?

-  It will take some time. Generally, Kazakhstan cannot replace Ukraine in the next few years. According to the total harvest indicators, Kazakhstan considerably lags far behind. During the Soviet era, the total area of ​​agricultural soil in Kazakhstan was about 40 million hectares. Currently, about 20-22 million hectares are used. Therefore, productivity in our country is low. Of course, we have wheat reserves. We need nearly 10 million tons of wheat for domestic consumption, the rest is exported. But again, there is no place to store this wheat. Grain elevators are private and old enough. There is a problem regarding the storages. Kazakhstan will be able to export a certain proportion to the world market, but in my view, our country will not be able to replace Ukraine in this matter. First of all, we plan to meet the needs of our population and neighbors Uzbekistan and Afghanistan. At the end of March 2016, the Minister of National Economy Yerbolat Dosayev announced that from July 1 of that year, 1.7 million hectares of agricultural land will be put up for auction. Many farms were expected to produce sunflower oil and wheat to supply China. Unfortunately, these reforms have been hindered. In other words, as a result of rallies for lands in Kazakhstan, the development of agriculture has stopped. Therefore, the next leap will take a while.

-  Kazakhstan has great potential in this direction…

- Potential exists, but it is also the same with oil. We sell crude oil, not manufactured goods. We had a large ‘Karachaganak’ gas field. Initially, it was assumed that the crude material from the field would be sent to the Orenburg Gas Processing Plant of the Orenburggazprom Production Association. Later, ‘Gazprom’ JSC and the state company ‘KazMunayGas’ (KMG) agreed to establish a joint venture to process gas from the Garachaganak field (Kazakhstan) on the base of the Orenburg Gas Processing Plant (OGP). But no progress has been made on this issue yet. There is potential, but the processing industry has not improved. It needs attention.

- How are Chinese and the US economies affected by the food crisis?

- The supply chain is broken, leading to inflation. As far as I know, Europe will soon halt automobile transportation. Russia and Ukraine are significant players in the food market. Therefore, I think that the Ukrainian ring is actually out of this chain. Ukraine cannot even put last year's wheat on sale. So, it cannot affect prices. It seems that we have to cope with it. Again, I hope that the conflict will end soon. The prolonged conflict will negatively impact the food supply in all countries.

- India aims to replace Russia and Ukraine in nearly 30 countries importing wheat. How do you assess India’s potential in this direction?

- I have studied materials on annual wheat yields in India, but unfortunately, they are unlikely to replace Russia and Ukraine in the world wheat market. They can offer about 7-10 million tons of wheat to the world market, but it will not solve the food problem in countries purchasing wheat. Since it is not a factory product, it is necessary to observe the climate conditions. Apart from that, wheat is not a product that can be produced immediately.

- Can Caspian countries protect themselves from food price spikes?

- I would say ‘to decrease pressure’ rather than ‘to protect’. For this, we need to have systematic customs tariffs and payment systems. Parliaments must work on that. The government holds a discussion, then parliament works.

We need to take into account Russia’s influence since the logistics of the Caspian states (from Kazakhstan to Azerbaijan) is a limited platform. Land roads are more comfortable and sustainable. So, we need to agree on how realistic it is. No positive solution is expected until the end of the conflict. The only way is to use the potential of ferries for product transportation. We have very few sources and means.