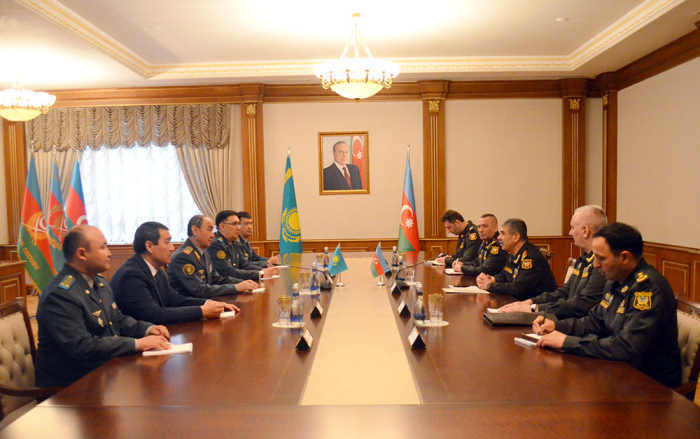 On May 12, the Minister of Defense of the Republic of Azerbaijan, Colonel General Zakir Hasanov, met with a delegation led by the Chief of the General Intelligence Department of the Ministry of Defense of the Republic of Kazakhstan, Lieutenant General Serik Iztleuov, who is on a visit to the country, AzVision.az reports citing the Defense Ministry of Azerbaijan.

The defense minister welcomed the guests and noted that relations between the two countries are based on a solid historical basis and close fraternal relations.

Colonel General Z. Hasanov gave detailed information about the work carried out in the liberated territories after the victory gained in the Patriotic War under the command of the President of the Republic of Azerbaijan, Supreme Commander-in-Chief of the Armed Forces Mr. Ilham Aliyev.

The minister also spoke about the reforms carried out in the Azerbaijan Army, taking into account the combat experience gained in the Patriotic War and the model of the Turkish Armed Forces.

Delivering the greetings of the Minister of Defense of the Republic of Kazakhstan, Lieutenant General S. Iztleuov stressed the importance of mutual visits in terms of expanding military cooperation.

The importance of conducting joint exercises to raise the professional level of servicemen of the two countries was stressed during the meeting.

At the end, the sides exchanged views on the current state of cooperation in the field of military, military education and military intelligence, its development prospects and other issues of mutual interest.