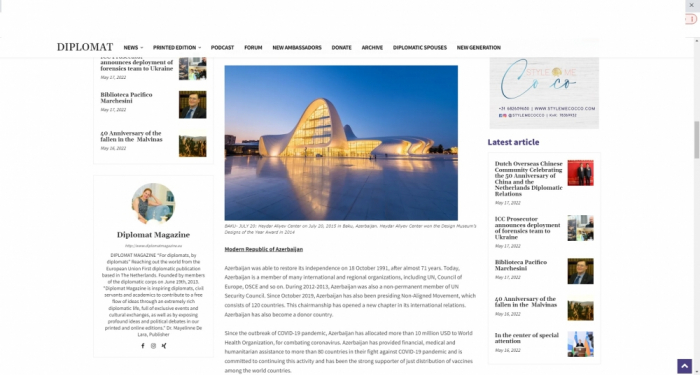 The Netherlands-based Diplomat Magazine has published an article by Azerbaijani Ambassador to the Kingdom of Netherlands Fikrat Akhundov headlined “Azerbaijan celebrates 104th anniversary of its independence.”

The article reads: “On 28 May, Azerbaijanis worldwide celebrate the “Independence Day”. 104 years ago on this significant day, Azerbaijan Democratic Republic (ADR) – predecessor of the modern Republic of Azerbaijan was proclaimed.

The establishment of the ADR was a historic event for Azerbaijan in many regards:

• It was the first democratic republic in the Muslim East. Declaration of Independence, which was adopted by this young republic on 28 May 1918, was an exemplary policy document, reflecting true principles of democracy and rule of law.

• For the first time in Islamic world, Azerbaijan granted suffrage to women. This happened in 1918, which was way ahead of many western countries. In comparison, several European countries like the Netherlands, Belgium and Luxembourg granted women right to vote in 1919, France in 1945.

• The first Parliament of Azerbaijan was established in 1918. Azerbaijani Parliament was a forum where representatives of many religious and ethnic groups could freely, indiscriminately and equally voice their opinions. The Parliament united members of different ethnicities: Azerbaijanis, Russians, Jews, Armenians and even one German.

ADR succeeded in implementing many progressive reforms in Azerbaijan, despite the geopolitical challenges. However, independence of ADR came to an end after 2 years. In April 1920, Red Army entered Azerbaijan. However, Azerbaijani people never forgot the ideals and principles of democracy taught by their ancestors and still celebrate 28 May as their National Day.

Since the outbreak of COVID-19 pandemic, Azerbaijan has allocated more than 10 million USD to World Health Organization, for combating coronavirus. Azerbaijan has provided financial, medical and humanitarian assistance to more than 80 countries in their fight against COVID-19 pandemic and is committed to continuing this activity and has been the strong supporter of just distribution of vaccines among the world countries.

After the restoration of its territorial integrity in 2020, Azerbaijan proclaimed its green energy policy in its territories. It includes smart cities and smart villages.

Azerbaijan was one of the first countries to provide and continue to assist humanitarian aid to Ukraine in the light of the current situation in this country.

Today, Azerbaijan is a reliable international partner and initiator of large-scale infrastructure, transport and energy projects in the South Caucasus. Azerbaijan has become a key investment destination in the region for the past years, due to a number of factors, including abundant resources, favourable location, competitive cost of production and of course, friendly laws and hospitality of Azerbaijani people. Due to its geographical position Azerbaijan became a principal transportation hub between East-West and North-South. Azerbaijan has built one of the biggest ports at the Caspian Sea and Baku-Tbilisi-Kars railway route has been realized. These two projects serve to connect Caspian Sea region with Black Sea. Azerbaijan also continues to be the strong partner of EU, in particularly contributing to the energy security of the region.

In the recent decades, Azerbaijan has hosted many international events, such as Eurovision, Formula 1 Grand Prix races, European games, 2021 European Football Championship and many more. The country also regularly provides scholarships for students from developing countries to pursue their higher education in Azerbaijan.

Azerbaijani culture, music, art and cuisine are very unique. Here is a compilation of some interesting facts about this beautiful country:

• Fire is the symbol of ancient and modern Azerbaijan and you can see it everywhere in Azerbaijan. For instance, the ancient Fire Temple “Atashgah” is Zoroastrian temple located in Baku; “Burning Mountain” is a unique mountain which burns throughout the year, regardless of the weather, from the natural gas that escape from its core. “Flame Towers” modern trio of skyscrapers designed and lit in the shape of a flame in Baku.

Azerbaijan has unique, unprecedented and ancient oil history. The first oil well in the world was built in 1846 in Bibi-Heybat, Azerbaijan. Azerbaijan was also a pioneer country in production of oil in the sea. Not surprisingly, this beautiful country hosts the first city built on stilts – Oil Rocks. This amazing structure has been registered in the Guinness Book of Records as the oldest and most unique sea oil platform in the world. Azerbaijan has long traditions of producing oil. In fact, in 1901 Azerbaijan was producing more than half of the oil in the world. Roughly, 12 percent of Nobel Prize, which was established in 1901, was drawn from Alfred Nobel’s shares in Nobel Brothers’ Petroleum Company in Baku. You can visit Nobel villa – “Villa Petrolea” to see the traces of Nobel brothers in Baku.

• Azikh Cave, located in Karabakh region of Azerbaijan, is a habitation site of prehistoric humans. Discovered in 1960, this is one of the most ancient locations of proto-human presence in Eurasia.

• Azerbaijan is the mud volcano capital of the world. This country hosts the biggest number of active volcanoes in the territory of Absheron peninsula.

• Azerbaijan has also today amazing architecture. Heydar Aliyev Center, Baku’s cultural hotspot, was designed by late Zaha Hadid and won the London Design Museum’s Design of the Year in 2014. This architectural masterpiece is the symbol of Azerbaijan’s modernism and development.

• Azerbaijan is a unique centre for carpet weaving. The country hosts seven different regional schools, bearing different styles of carpet weaving. Carpet Museum – located in Baku and designed in the shape of a carpet – hosts the worlds’ biggest collection of Azerbaijani carpets.

• The world’s first private miniature book collection museum is located in Baku, Azerbaijan. There are more than 5.500 miniature books in the museum, which is registered in Guinness Book of Records.

• This year Formula 1 Azerbaijan Grand Prix 2022 will once again held in Baku. Baku City Circuit will start on 10-12 June. The Baku City Circuit is considered to be one of the most spectacular and complex tracks and it is always remembered with interesting outcomes.