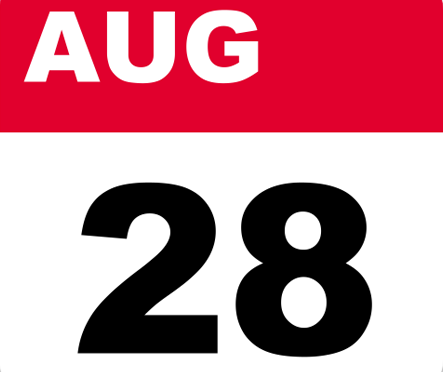 A chronological timetable of historical events that occurred on this day in history. Historical facts of the day in the areas of military, politics, science, music, sports, arts, entertainment and more. Discover what happened today in history.

1676 Indian chief King Philip, also known as Metacom, is killed by English soldiers, ending the war between Indians and colonists.

1914 Three German cruisers are sunk by ships of the Royal Navy in the Battle of Heligoland Bight, the first major naval battle of World War I.

1938 The first degree given to a ventriloquist’s dummy is awarded to Charlie McCarthy–Edgar Bergen’s wooden partner. The honorary degree, "Master of Innuendo and Snappy Comeback," is presented on radio by Ralph Dennis, the dean of the School of Speech at Northwestern University.

1941 The German U-boat U-570 is captured by the British and renamed Graph.

1944 German forces in Toulon and Marseilles, France, surrender to the Allies.

1963 One of the largest demonstrations in the history of the United States, the March on Washington for Jobs and Freedom, takes place and reaches its climax at the base of the Lincoln Memorial when Dr. Martin Luther King delivers his "I have a dream" speech.

1965 The Viet Cong are routed in the Mekong Delta by U.S. forces, with more than 50 killed.

1968 Clash between police and anti-war demonstrators during Democratic Party’s National Convention in Chicago.

1986 Bolivian president Victor Paz Estenssoro declares a state of siege and uses troops and tanks to halt a march by 10,000 striking tin miners.

1986 US Navy officer Jerry A. Whitworth given 365-year prison term for spying for USSR.

1774 Elizabeth Ann Seton, founder of the Sisters of St. Joseph and the first U.S.-born saint.

1882 Belle Benchley, the first female zoo director in the world, who directed the Zoological Gardens of San Diego.

1925 Donald O’Connor, entertainer (Singin’ in the Rain, Anything Goes).

1986 Gilad Shalit, Israeli Defense Forces corporal kidnapped by Hamas and held for five years before being exchanged for 1,027 Palestinian prisoners.