Pope Francis embraces the mystical side of the Catholic Church 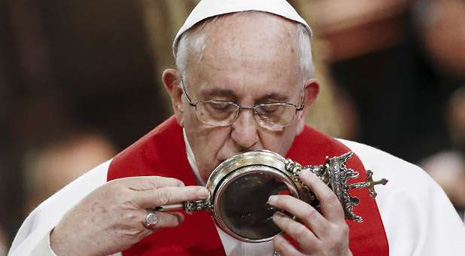 The faithful here are still talking about Pope Francis and the holy blood.

On an official trip to this ancient city in the shadow of Mt. Vesuvius, Pope Francis entered the local cathedral to pray to Januarius, the patron saint of Naples. Januarius’s 1,700-year-old dried blood is known to “spontaneously liquefy,” a phenomenon seen by true believers as a miraculous sign from above. Those gathered anxiously watched as Francis prayed before, then kissed, the ornate silver and glass reliquary containing the coagulated clot.

And lo and behold, the dark stain dissolved.

The cardinal of Naples, standing beside Francis, joyously heralded the sacred melting, bringing a round of gasps and applause. Then Francis himself acknowledged the mystery, in which the blood had only half liquefied. “It means the saint loves us halfway,” Francis said, according to accounts of those present that day five months ago. “We must all spread the word of God more, so that he loves us even more."

To many, the first Latin American pope is a reformer, a man determined to lead the Catholic Church into a new age of enlightenment.Yet as Pope Francis prepares to make his first official trip to the United States, his papacy is also proving to be one of apparent contradictions. Perhaps the biggest: A pope who has become the darling of intellectuals, even atheists, is also fully embracing some of the most fervent forms of worship within the Catholic Church.

Far more than his predecessor, Francis has thrust himself into the contentious world of so-called popular devotions — including the mystical celebration of holy relics, such as the blood, bones and clothing of saints, as well as the adoration of the Virgin Mary through processions and other rites. By doing so, Vatican watchers say the pope is effectively endorsing a more ardent and mysterious brand of Catholicism that is popularly practiced — especially among the poor — in his native Latin America.

Critics, however, say the pope may be flirting with superstition. Also citing his constant mention of the devil and explicit backing of exorcisms, some say he risks undercutting his image as a 21st century moral leader in tune with the times.

“The danger is that popular devotion becomes all too important, that we seek to elevate ourselves by touching a body part or a cloth touched by a saint,” said Vito Mancuso, a Bologna, Italy-based theologian and author. “We would be moving backwards, almost to idolatry.”

The incident in Naples, where Francis caused a stir with the blood of Saint Januarius, marked only one in a long list of recent papal devotions to relics and other mysterious artifacts. In June, for instance, the pope “venerated” the Shroud of Turin, praying before the cloth believed by some to be the burial garment of Jesus Christ despite disputed tests that have carbon dated it to centuries after the crucifixion.

The pope made no official claim about the shroud’s authenticity. But his personal charity has sent at least two busloads of homeless Romans to visit the shroud, and the pope additionally taped a special video message celebrating it.

“Let us listen to what it wants to silently tell us, across death itself,” the pope says in the message. “The sole and ultimate word of God reaches us through the sacred shroud.”

The pope has recently requested that the remains of Saint Pio of Pietrelcina, widely known in Italy simply as Padre Pio, be publicly exhibited in St. Peter’s Cathedral next year. Six months after Francis became pope, the Vatican for the first time publicly displayed bone fragments said to belong to Saint Peter despite lingering doubts about their true origins.

Coinciding with the pope’s U.S. visit, the body of Saint Maria Goretti — an 11-year-old Italian girl stabbed to death in 1902 by a family friend — will also travel to the United States on a multi-city tour. In Nettuno, Italy, her sanctuary is filled with mementos of gratitude — wedding dresses, rosaries and statues — from those who claim to have been cured of ailments after praying to her.

“The pope is clearly well inclined toward this kind of worship,” said the Rev. Giovanni Alberti, abbot of Goretti’s sanctuary. “He is from South America, where there is a strong sensibility of popular devotion.”

Even among those who support the pope, his actions have raised red flags. Citing Francis’s affinity for popular devotion, the Catholic blogger and U.S.-based author Taylor Marshall, for instance, wrote that he feared what “sophisticated non-Catholics” might make of the pope’s actions.

Such a person, Marshall wrote, “shakes his head and thinks to himself, ‘This Pope doesn’t get [it]. This isn’t the Gospel of Jesus Christ! This is shanty town syncretism at best, or ignorant magic at worse.’ ”

Yet many of the pope’s supporters instead see a man who is once again rejecting elitism and siding with the poor, especially in the developing world, when it comes to how to practice faith.

A devotion to relics

In Catholic doctrine, relics — most frequently the blood, bones or belongings of saints and other holy figures — do not possess intrinsic supernatural power. But they are considered sacred, and in some instances could serve as conduits for miracles bestowed by God through the intercession of saints or the Virgin Mary. The exalted place of relics remains one of the core differences between Catholicism and many protestant faiths, and still divides many Catholics.

Francis’s dedication to popular devotions far pre-dates his papacy. As a church official in Argentina, Francis’s open devotion to relics, elaborate street processions and other practices often “horrified” intellectual clerics in his progressive Jesuit order, said papal biographer Austen Ivereigh. In 2007, Francis deeply influenced a pivotal document among Latin American bishops that reinforced the importance of “how the poor meet God in shrines.”

“He talks about a popular kind of ideology, that the ‘pueblo’ can be in touch with the holy directly and in ways that the elites often miss,” Ivereigh said.

Among the faithful in Naples, there is no denying the pull of popular devotions.

The blood of Saint Januarius remains a mystery unsolved. Some argue temperature changes, or movement, could cause the metamorphosis. The faithful, however, see the transformation as a sign that their patron saint is hard at work protecting Naples from pestilence, earthquakes and the hot temper of Mt. Vesuvius. Three times a year, the dried blood is put on public display when it often, but not always, liquefies.

Francis’s March visit marked the first time the blood has dissolved in the presence of a pope since 1848. Enzo Piscopo, the 75-year-old spokesman for the diocese of Naples, recalled the less fruitful visit of Pope Benedict XVI, who arrived in the midst of a bizarre and early winter storm in October 2007.

For some Neapolitans, the blood melting made the recent papal visit all the more magical. Rita Santoro, a 69-year-old who sells prayer cards on the steps of the cathedral, was waiting just outside during Francis’s March visit. She said he touched her head as he left, “and after that, the stomach problems I had been having just disappeared,” she said.

“For me, the blood liquefaction for the pope was a miracle,” she said. “It means the pope has blessed Naples. And we have so many troubles here. We need it.”