GCC, US announce $11 billion for food security at Arab summit 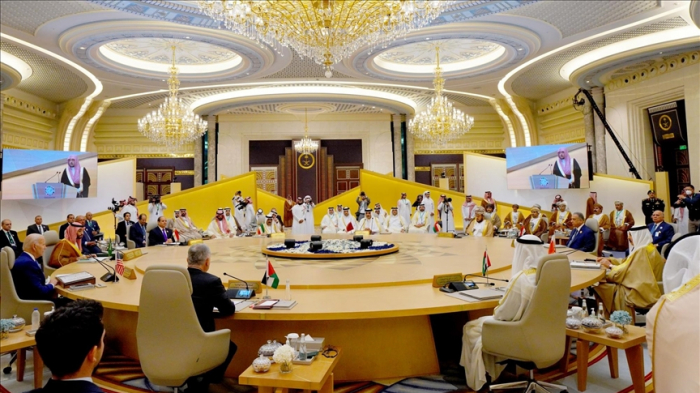 Members of the Gulf Cooperation Council (GCC) and the US announced Saturday that they will provide $11 billion in support to overcome regional and international food security challenges, AzVision.az reports citing Anadolu Agency.

The US welcomed the "decision by the Arab Coordination Group (ACG), which includes 10 Arab and national specialized financial developmental institutions, to provide a minimum of $10 billion in response to food security challenges," according to Saudi Arabia’s state news agency, SPA, that cited a statement by the GCC and the US following a US-Arab summit in the Saudi city of Jeddah.

The statement said GCC countries welcomed the US announcement of $1 billion in new near- and long-term food security assistance for the Middle East and North Africa region.

The GCC also expressed appreciation for "the establishment of Combined Task Force 153 and Task Force 59, which will enhance joint defense coordination between the GCC member states and the US Central Command to monitor maritime threats better and improve naval defenses by utilizing the latest technologies and systems," it added.

US President Joe Biden concluded a four-day trip Saturday to the Middle East region that included stops in Saudi Arabia, Israel and the West Bank.

The tour is seen as an attempt to assert US leadership in the region against Russia and China.

A summit was held Saturday and was attended by Biden, leaders of the GCC countries, Egypt, Iraq and Jordan.