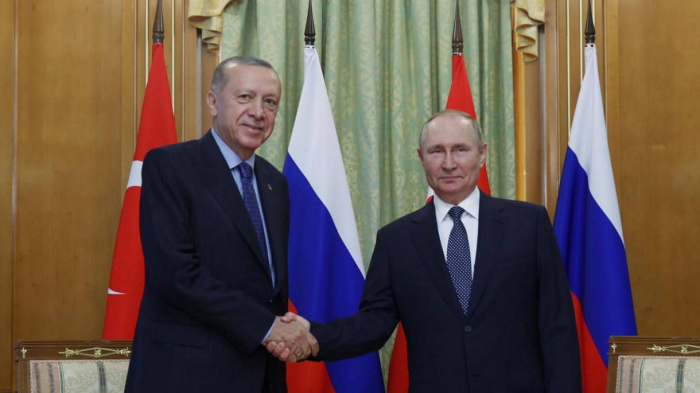 Russian and Turkish Presidents, Vladimir Putin and Recep Tayyip Erdogan, have stressed the importance of preserving Syria’s political unity and territorial integrity, according to a joint statement adopted by the leaders on Friday after their meeting in Sochi, AzVision.az reports citing TASS.

"Among the topics discussed by the sides were the recent developments in Syria. The sides reiterated that they attach greater significance to the efforts to promote the political process. They stressed the importance of preserving Syria’s political unity and territorial integrity," the document reads.

The leaders once again reiterated their "commitment to act together and in close coordination to fight against all terrorist organizations."

The Russian and Turkish Presidents - Vladimir Putin and Recep Tayyip Erdogan - had talks in the narrow format in the Green Hall of the Imperial Building of the Rus health resort in the Black Sea city of Sochi on Friday.

As Kremlin Spokesman Dmitry Peskov announced earlier, the negotiations are scheduled to touch upon a wide range of bilateral cooperation as well as regional and international issues. Thus, the leaders are expected to focus on the Russian-Turkish multifaceted cooperation, including the prospects for broader trade and economic ties in the future and the implementation of joint strategic energy projects, and to share views on exports of Ukrainian grain, on Ukraine, Syria and Nagorno-Karabakh.

Ankara views the Sochi talks between Erdogan and Putin as a follow-up to their meeting in Tehran on July 19 on the sidelines of the Astana troika summit.