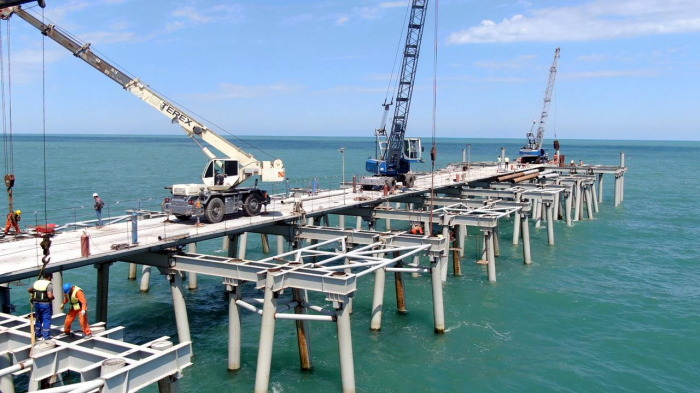 The drop in the water level in the Caspian Sea by almost 2 meters over the past 20 years has created a serious threat to the operation of the Shimal (Northern) power plant, which is the second largest power plant in Azerbaijan and provides electricity to more than 40% of Baku, AzVision.az reports citing Azerenergy OJSC, largest electrical power producer in Azerbaijan.

The urgent construction of a 540-meter-long overpass into the Caspian Sea, which allows unhindered intake of cold water, and 2 water pumping stations has started to eliminate the threat of a halt at the Shimal power plant in the near future and save the plant.

Considering that the drop in the water level created severe problems for the collection of cooling water, in the short term, a complete shutdown of the Shimal-1 and Shimal-2 power plants, which produce the most considerable amount of energy and have a total capacity of 800 megawatts, would be inevitable. The construction of a new overpass and water pumping stations will not only save the stations, but also, due to the water intake from a greater depth, will allow obtain water 2.6 degrees cooler. In total, four pipes will be laid on both sides of the new overpass, and eight pumps will operate at two pumping stations.

“The building of a new overpass is carried out according to the shift principle. The construction of a new overpass and a water pumping station at the Sumgayit plant, due to the drop in the water level in the Caspian Sea, has been successfully completed, and it has already given positive results.

The construction of a new water intake complex of the Shimal power plant is also carried out not by a foreign but by a domestic company, and at present, the work is one month ahead of schedule. Thus, the project is expected to be completed in the first half of 2023,” Azerenergy said.