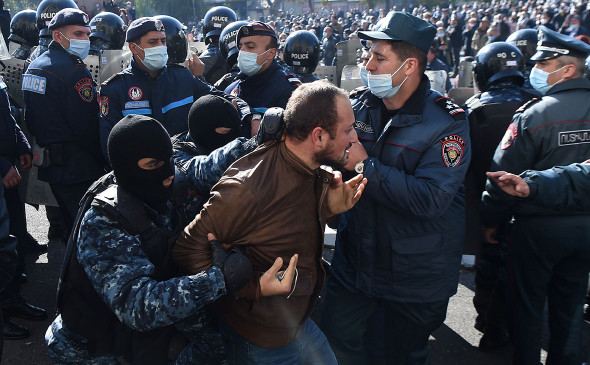 Azerbaijani NGOs working in the field of human rights protection appealed to international organizations in connection with persons who have been persecuted by the General Prosecutor's Office of Armenia and applied for obtaining Azerbaijani citizenship, AzVision.az reports.

"With a feeling of great concern, we express concern that the Prosecutor General's Office of Armenia opened a criminal case against Ishkhan Verdyan and Vahe Gambaryan in connection with their appeal to President Ilham Aliyev for obtaining Azerbaijani citizenship,” the appeal authors said.

“Unfortunately, with such steps, the Armenian leadership is trying to intimidate people who want to legally reside in Khankandi, as well as in neighboring cities and villages as citizens of Azerbaijan. At the same time, official Yerevan accuses citizens, who declare among the population living in Karabakh about the need for peaceful coexistence with Azerbaijan and Azerbaijanis, of allegedly provocative activity,” the authors noted.

“By such unlawful actions against these persons, the Armenian authorities, seeking to undermine Azerbaijan's efforts to establish peace, grossly violate the UN Covenant on Civil and Political Rights, the European Convention for the Protection of Human Rights and Fundamental Freedoms and other related international rights and norms,” the authors also said. “So, according to the norms of international law, every person has the right to freedom and inviolability, the right not to be discriminated on national, racial, religious, ethnic and social grounds, every person on the territory of any state has the right to freely choose a place of residence.”

“At the same time, according to these conventions, everyone has the right to freedom of expression. This right includes the freedom to hold one's own opinion, to spread information regardless of frontiers, without any obstruction from government bodies,” the authors reminded.

“Taking into account the above facts, we demand taking appropriate measures against the Armenian authorities seeking to undermine Azerbaijan's efforts to bring peace in the region," concluded the authors.