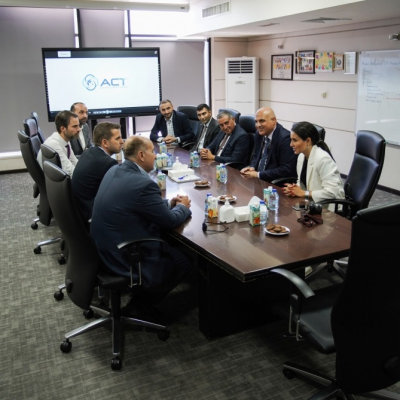 A delegation of the Alat Free Economic Zone of Azerbaijan (AFEZA) has visited the Jordanian Businessmen Association (JBA) as part of its visit to the country, AzVision.az reports.

Deputy Chairman of the Board of Directors at the AFEZA Ismayil Manafov and Azerbaijani Ambassador to Jordan Eldar Salimov highlighted the signing of a Memorandum of Understanding on cooperation between the AFEZA and Jordan's Aqaba Special Economic Zone Authority (ASEZA), and touched upon the prospects of cooperation in various fields.

The Azerbaijani delegation also visited the Aqaba Special Economic Zone. Chairman of the Board of Directors of the Jordan Free and Development Zones Group Khalaf Al-Hmeisat said that about 6 free zones which were established in the country in 1983-2019, adding that new jobs were opened thanks to the commissioning of various logistics centers.

AFEZA Chairman of Board Ismayil Manafov highlighted huge projects such as the Alat Free Economic Zone and the Baku International Sea Trade Port implemented in Azerbaijan.