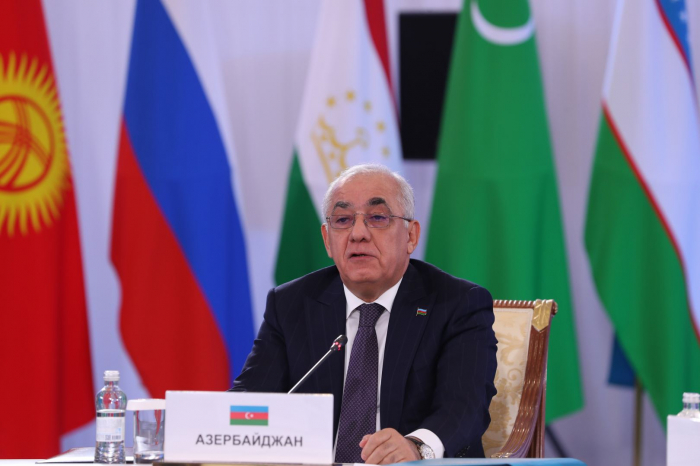 Deputy Minister of Armenia Mher Grigoryan made a number of unfounded accusations against Azerbaijan during the meeting of the Council of Heads of State of the CIS (Commonwealth of Independent States) in Astana, Kazakhstan, AzVision.az reports citing Azerbaijan's Cabinet of Ministers.

Prime Minister of Azerbaijan Ali Asadov, after all the speeches, responded to the accusations of Grigoryan. He said that Azerbaijan after its victory in the second Karabakh war announced that the Karabakh conflict was over.

"Azerbaijan liberated its territories from the occupation and is ready to sign the peace agreement with the neighboring country. The five principles put forward by Azerbaijani side were mainly supported by Armenian side. Based on these positions, today Azerbaijan tried to talk about the issues on the agenda within the framework of constructivism," Asadov stated.

"There is such philosophical concept as morality. Morality applies both to human relations and to interstate ones. A country that for 30 years kept the territory of a neighboring state under occupation, occupying seven regions that have nothing to do with the former Nagorno-Karabakh, a country whose Armed Forces left no stone unturned on the territory of a sovereign neighboring state, destroyed everything that was possible to destroy: cities, villages, ecology, moral, spiritual values, today speaks of some alleged violations of Armenia's territorial integrity committed by Azerbaijani Armed Forces," Asadov said.

The fact that political establishment of Armenia didn't remember the concepts of sovereignty, borders, occupation during all those 30 years despite the four resolutions of UN Security Council and documents of other international organizations was brought to the attention of CIS Council of Heads of State.

"This process didn't start yesterday and you all know that. Azerbaijan thought that the conflict was over and was ready for peaceful cooperation. In this regard, I said in my speech that the country adheres to the the tripartite statements of 2020 and 2021 signed by the presidents of Azerbaijan, Russia and the Prime Minister of Armenia. Unfortunately, Azerbaijan doesn't understand the position of the Armenian leadership. In principle, this is their business. The Prime Minister says one thing, his deputy says something completely different. These are the internal political positions of Armenia, this is their business. Nonetheless, Azerbaijan must base its position on something," he said.

Informing the participants of the meeting about the Armenian provocations, he said that the country's Armed Forces subjected Kalbajar and Lachin districts of Azerbaijan to fire on the night of September 12- early September 13.

"I have said multiple times and in front of the representative of Armenia that there are red lines for every state. Azerbaijan is ready for cooperation, signing peace agreement with Armenia, but the the country will not give up even an inch of its land," he said.

Touching upon the subject of tripartite statement of November 9/10, 2020, he noted that one of its points implies the unblocking of transport communications.

"According to this statement, Azerbaijan has assumed obligations that the Lachin highway will function and Azerbaijan guarantees its safety. The country is fulfilling all its obligations. Lachin highway is working today, the corridor is operating. At the same time, Azerbaijan doesn't have the opportunity to travel from the main part of Azerbaijan to the Nakhchivan Autonomous Republic. Not only is there no possibility, but the country doesn't see any actions being taken in the territory of Armenia in this direction.

He also responded to the rude and unfounded accusations of Armenian side of Azerbaijan's war crimes.

"I must once again state that there is such a thing as morality. The Military Prosecutor's Office of the Republic of Azerbaijan is comprehensively doing an investigation, to establish objective truth. Unlike Armenia, Azerbaijan takes its international obligations seriously and claims in connection with war crimes committed during military operations are investigated by the relevant state bodies," Assadov said.

He also brought the attention of the participants to Armenian war crimes during the first Karabakh war.

"A total of 613 civilians were brutally killed in Khojaly in just one night on February 26, 1992. To date, no information has been provided about the fate of about 4,000 Azerbaijanis. After the liberation of this territory, we discovered places of mass graves of both military personnel and civilians," Asadov said.

He once again stated that Azerbaijan fulfilled, still fulfills and will fulfill all of its obligations.

Asadov noted that Azerbaijan wants to receive an adequate assessment of all the facts that were presented by the Armenian side.

As a result of the meeting of of the Council of Heads of State of the CIS, a number of documents were signed.