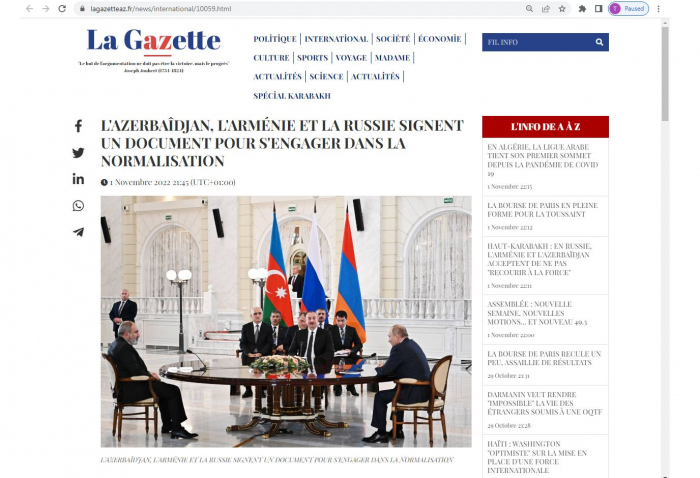 French La Gazette online newspaper published an article about the meeting of President of Azerbaijan Ilham Aliyev with President of Russia Vladimir Putin and Prime Minister of Armenia Nikol Pashinyan in Sochi on October 31, AzVision.az reports.

The article, referring to the the final Statement, said that Azerbaijan and Armenia reaffirmed their commitment to strict compliance to all the agreements for the comprehensive normalization of the relations between both countries, ensuring peace, stability, security and sustainable economic development of the South Caucasus.

The article emphasized that both sides agreed to refrain from using force and threats of its use, resolve all the problems solely on the basis of recognition of sovereignty, territorial integrity and inviolability of borders in accordance with the UN Charter and the 1991 Alma-Ata Declaration.

"The importance of forming a positive atmosphere to continue the dialogue between Azerbaijan and Armenia was emphasized to continue dialogue between representatives of society, expert associations and religious leaders with Russia's help as well as to attract trilateral inter-parliamentary relations in order to strengthen trust between the peoples of the two countries," the article said.

In addition, the article, citing the words of Head of Azerbaijani state Ilham Aliyev during his bilateral meeting with Russian President Vladimir Putin, noted that Karabakh conflict is already history and it was resolved two years ago.