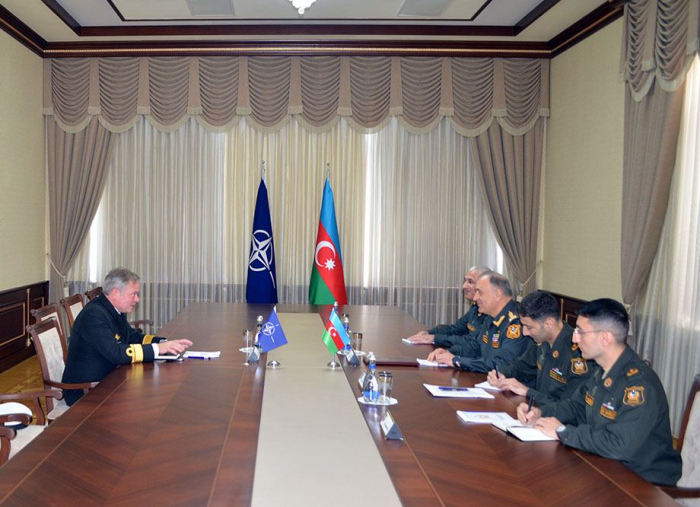 On November 21, the First Deputy Minister of Defense – Chief of the General Staff of the Azerbaijan Army, Colonel General Karim Valiyev met with the Deputy Chief of Staff at Partnership Directorate at NATO's Supreme Headquarters Allied Powers Europe, Rear Admiral Gunnstein Bruåsdal, who is on a visit to Azerbaijan as part of the NATO Days, AzVision.az reports citing the Azerbaijani Defense Ministry.

Welcoming the guest, Colonel General K. Valiyev emphasized the development of relations between Azerbaijan and NATO, as well as the active participation of the Azerbaijan Army representatives in various NATO programmes.

Stressing the importance of the victory gained in the Patriotic War under the leadership of the Supreme Commander-in-Chief of the Armed Forces, the Chief of the General Staff of the Azerbaijan Army spoke about the work done in the liberated territories during the post-war period.

Prospects for the development of cooperation between Azerbaijan and NATO, as well as areas of joint activity against current and potential threats were discussed at the meeting.

Colonel General K. Valiyev highly appreciated the contribution of the North Atlantic Alliance to the training of the Azerbaijan Army Units as part of the NATO Operational Capabilities Concept.
Expressing gratitude for the warm reception, Rear Admiral G. Bruåsdal emphasized that Azerbaijan is a reliable partner of the North Atlantic Alliance and highly appreciated the active participation of our country in the fight against terrorism, the activities of Azerbaijan Army servicemen at NATO headquarters, as well as their professionalism demonstrated in international peacekeeping missions.

A detailed exchange of views on a number of other issues of mutual interest was held during the meeting.