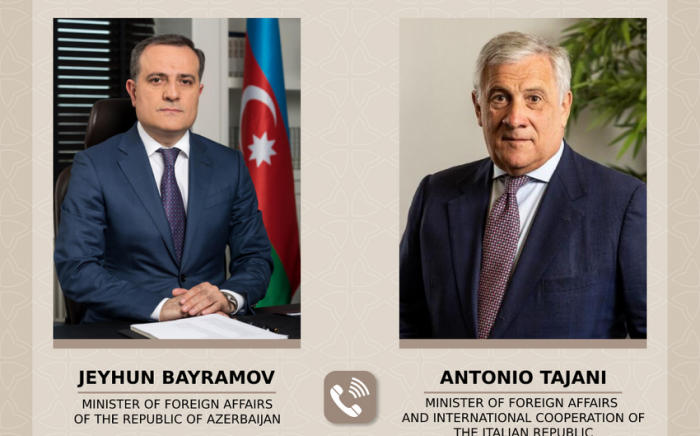 Bayramov first congratulated his counterpart on his appointment to this high position and wished him success in his work. The minister noted that the high-level visits, in particular, Italian President Sergio Mattarella's visit to Azerbaijan in 2018, Azerbaijani President Ilham Aliyev's visits to Italy in 2020 and in September of this year, as well as the former Minister of Foreign Affairs and International Cooperation Luigi Di Maio's visit to Azerbaijan in 2022 played an important role in strengthening the strategic partnership between the two countries.

Minister Antonio Tajani expressed satisfaction with the strategic dialogue and cooperation between Azerbaijan and Italy. He emphasized that Italy always supports peace and stability in the region. The minister pointed out broad prospects for cooperation in education and culture in addition to energy.

The parties noted the relations of effective cooperation between Azerbaijan and Italy in the economic field. They asserted that Italy is Azerbaijan's largest trade partner, and Azerbaijan is one of Italy's largest energy suppliers in this regard. The sides emphasized the importance of the Southern Gas Corridor and the TAP gas pipeline, which is part of it, in the expansion of cooperation in the field of energy.

Other issues of mutual interest were discussed during the telephone conversation. Bayramov invited the Italian foreign minister to visit Azerbaijan.