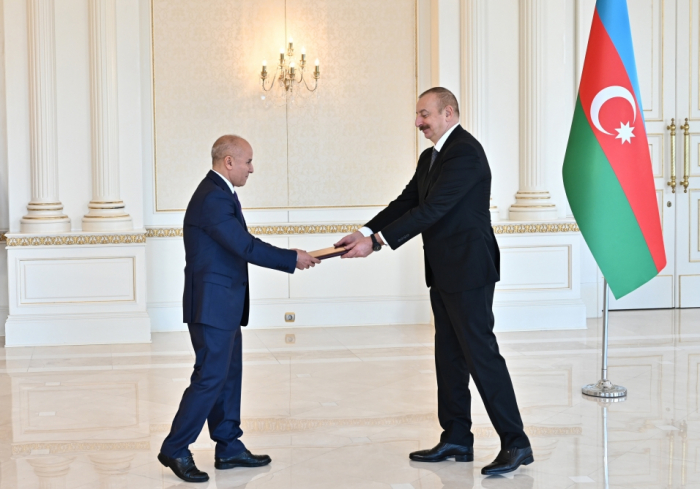 President of the Republic of Azerbaijan Ilham Aliyev has received credentials of the newly appointed Ambassador Extraordinary and Plenipotentiary of the State of Libya Ali Salem Nasser, AzVision.az reports.

Ambassador Ali Salem Nasser presented his credentials to the head of state.

Talking with the ambassador, President Ilham Aliyev said that Azerbaijan and Libya have always been friends and defended their interests. The head of state noted that both countries show mutual support on all issues within international organizations. President Ilham Aliyev pointed out that both during the occupation and after the occupation, Azerbaijan has always seen Libya`s support regarding the Armenia-Azerbaijan issue. Saying that the country also fells this support within the Non-Aligned Movement and the Organization of Islamic Cooperation, the head of state thanked the Libyan side for this.

President Ilham Aliyev recalled his participation in the 31st Arab League Summit recently held in Algeria, and emphasized that in his speech at this event he highlighted the current state of and prospects for relations between the Arab states and Azerbaijan. President Ilham Aliyev said that the invitation of Azerbaijan to this Summit as a guest of honor demonstrated once again the attitude of the Arab world towards the country.

The Azerbaijani President stressed the necessity of intensifying the bilateral ties, especially the cooperation in economic, trade and energy areas, taking into account friendly relations.

Thanking for the warm words, the ambassador conveyed the greetings of Head of the Presidency Council of Libya Mohamed Younis al-Menfi to the head of state.

President Ilham Aliyev expressed his gratitude for the greetings, and asked the ambassador to convey his greetings to Mohamed Younis al-Menfi.