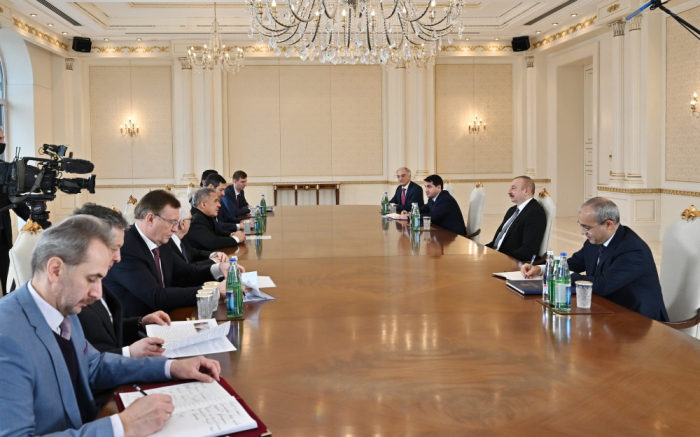 Rustam Minnikhanov underlined that he had visited Azerbaijan with a large delegation. He pointed out that the delegation also includes representatives of numerous companies, hailing the development of Tatarstan’s relations with Azerbaijan under the cooperation between the regions of Russia and Azerbaijan.

Praising the beauty of Baku, Rustam Minnikhanov noted the rapid development of Azerbaijan, and pointed out the work done in increasing the industrial potential of Azerbaijan.

The head of state noted that the dialogue between the two countries’ presidents is the main guiding factor for the development of bilateral cooperation in all fields. The President of Azerbaijan underlined the importance of high-level reciprocal visits in the current year, including his visits to Russia, as well as the visits at the level of the legislative bodies and governments of the two countries.

The production of KAMAZ in Azerbaijan was emphasized with satisfaction, and the importance of laying the foundation stone for the joint service center of KAMAZ OJSC and Ganja Automobile Plant Production Association with the participation of President Ilham Aliyev last October in “Araz Valley Economic Zone” Industrial Park in the liberated Jabrayil was noted in this regard.

Cooperation between the industrial zones operating in Azerbaijan and Tatarstan was pointed out at the meeting. It was noted that these issues will be discussed more broadly at the business forum held in Baku.

During the conversation, the sides exchanged views on cooperation between Azerbaijan and Tatarstan in a number of areas, including in energy, petrochemicals, investments, transport, logistics, industrial corporations, humanitarian tourism, and information and communication technologies within the Azerbaijan-Russia comprehensive relations.