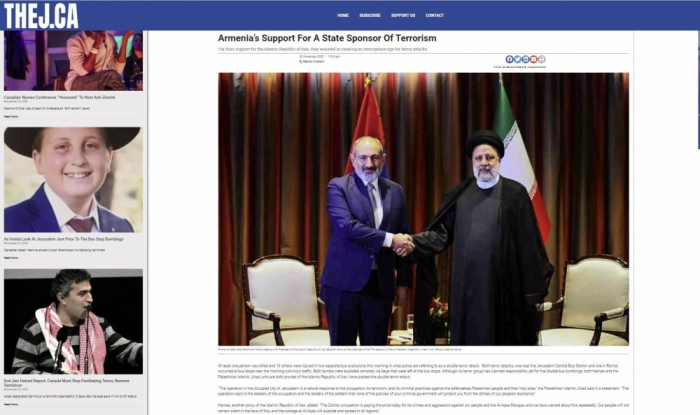 The article, which was written by Israeli political analyst of the Safadi Center for International Diplomacy, Research, Public Relations and Human Rights Rachel Avraham, emphasizes that Armenia did officially support Iran at the UN when a resolution was put up for a vote regarding the human rights violations in the country following the Iran protests.

It was also stated that a couple of years ago, advisor to the Chief of the Armenian Army General Staff Vladimir Pogosyan likened Israel to Nazi Germany and vowed vengeance for its support of Azerbaijan in the conflict over Karabakh.

The author of the article also refers to Taras Kuzio, a professor at the National University of Kyiv Mohyla Academy:"There is also a strong military alliance between the fundamentalist Shia regime in Tehran and Christian Armenia, which has been cemented in three ways."

"The first was Armenia assisting Iran and more recently Russia to evade international sanctions. The second was to act as an intermediary in the supply of drones and missiles to Russia that the Kremlin uses in its terror attacks against Ukrainian civilian targets. The third was for Armenia to diplomatically support Iran at the UN and in other international organizations," the author also stated in the article.