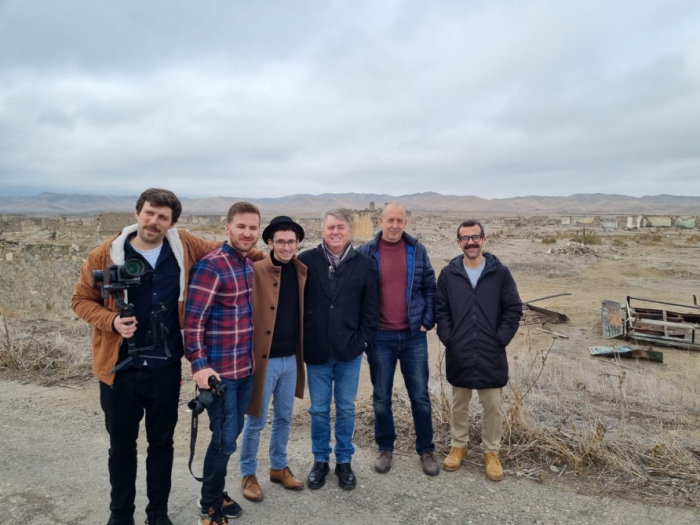 A group of journalists working in Spanish-language mass media outlets in foreign countries has visited Azerbaijan with the support of the Azerbaijani diaspora in Israel, AzVision.az reports.

During the visit foreign journalists met with the Assistant to the President of the Republic of Azerbaijan-Head of the Foreign Policy Affairs Department of the Presidential Administration of the Republic of Azerbaijan, Hikmat Hajiyev, the Chairman of the State Committee for Work with the Diaspora, Fuad Muradov, the Deputy Minister of Foreign Affairs, Fariz Rzayev, the Minister of Youth and Sports, Farid Gayibov, the Chairman of the State Committee for Work for Refugees and Displaced Persons, Rovshan Rzayev, and the Chairman of the State Committee on Work with Religious Organizations, Mubariz Gurbanli. The group was provided with detailed information about the history of the Armenia-Azerbaijan conflict, the realities of Karabakh, the crimes Armenia has perpetrated in the 30 years of occupation, the destruction of religious and cultural sites, and the missile strikes on population centers far from the frontline during the 44-day Patriotic War.

The foreign journalists visited Jabrayil and Zangilan districts, which were liberated from occupation on 29 November. The media group witnessed the scale of destruction and acts of vandalism committed by Armenia in the two districts, took photos, prepared video material, visited the Khudafarin bridge and Aghali village of Zangilan. The journalists were provided with detailed information about the post-war mine clearance efforts, large-scale restoration and reconstruction work, the resettlement of the population to Aghali, a village rebuilt on the basis of a “smart village” concept.