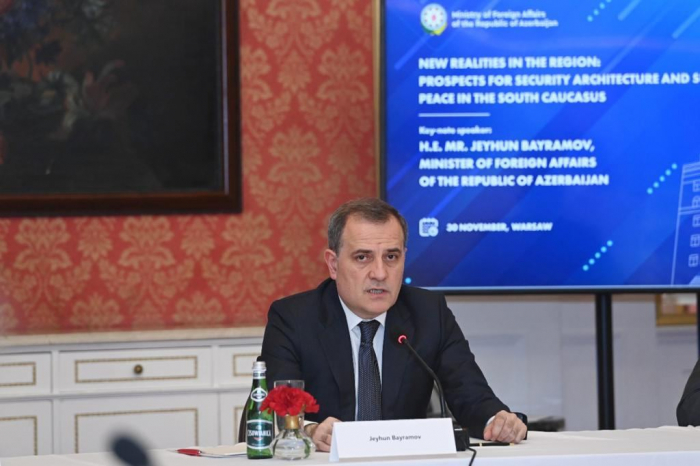 Azerbaijani Foreign Minister Jeyhun Bayramov took part in the conference on "New Realities in the Region: Security Architecture and Prospects for Sustainable Peace in the South Caucasus" as part of the 1st European Conference on Azerbaijani Studies in Poland's Warsaw on November 30, the Foreign Ministry told AzVision.az.

The minister delivered a speech at the event, which was attended by more than 30 European think tanks and research structures.

Bayramov spoke in details about Azerbaijan's peace efforts to ensure stability in the South Caucasus and the country's position in the negotiating process with Armenia. He outlined the importance of the reconstruction work carried out by Azerbaijan, as well as activities to open communication routes for the well-being of the entire region. Meantime, Armenia’s failure to fulfill its obligations stemming from the 2020 trilateral statement and other agreements between the Azerbaijani and Armenian leaders impedes the normalization and peacebuilding processes in the region.

The minister also underscored the landmine threat in the region and Armenian provocative actions.

Speaking of the energy security against the backdrop of recent regional and world events, Bayramov stressed the significance of expanding multilateral energy cooperation. He stated that Azerbaijan, as a country with a wide renewable energy potential, attaches considerable importance to the development of cooperation in this area, as well as emphasized the necessity of the Memorandum of Understanding (MoU) signed with the EU in July 2022.

The minister added that Azerbaijan has implemented a number of successful projects to strengthen connectivity along the Middle East-West Corridor, conducted work to restore transport and communication routes after the second Karabakh war. He pointed out the need for Armenia to implement its obligations under Paragraph 9 of the trilateral statement of November 10, 2020. The opening of all regional communication routes will be a key contribution to development.