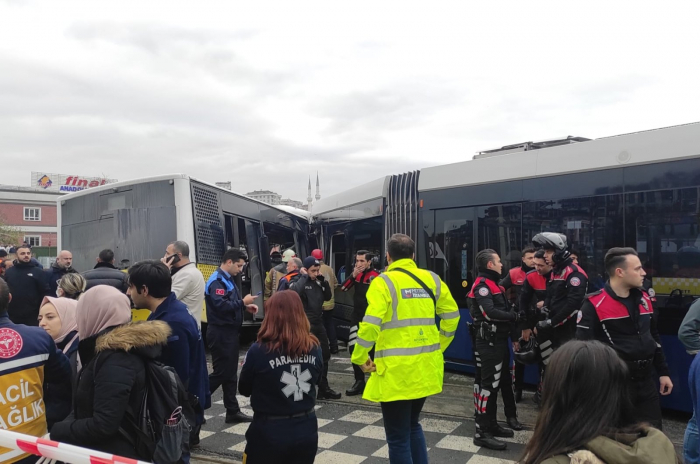 A tram and an inner-city passenger bus collided in Istanbul's Alibeyköy neighborhood on Monday, resulting in 19 people being injured, including four in critical condition.

The accident occurred earlier this morning near the Alibeyköy tram stop when the bus was trying to pass across the tramway's tracks.

A large number of ambulances were dispatched to the scene to assist the 19 people who were injured, according to reports. The moment of the accident was also caught by security cameras.

"Our services will work temporarily between the Cibali and University stations on our T5 Cibali-Alibeyköy Bus Terminal Tram Line," the statement made by Metro Istanbul, the tram authority, said.

Istanbul, the most populated city of Turkiye, has a wide and punctual transport system but the growing population has resulted in transportation issues. Almost everyday, a notorious traffic accident occurs due to heavy traffic. Residents who have occasionally had to push the vehicles themselves because of frequent breakdowns are increasingly frustrated.

According to the information received, a large number of health, police and firefighters were sent to the scene at Alibeyköy Mareşal Fevzi Çakmak Street. "We barely got out of the vehicle. God protected us," parking lot officer Selahattin Şahin expressed. He further told reporters of witnessing the tram cutting the bus in half.

The work of removing the bus with a crane and tow truck that came to the scene continues. Due to a significant fuel leak from the bus, the firefighters sprayed the area with firefighting foam.

One of the eyewitnesses, Melih Kartal, said that while he was working, there was a sudden loud noise, he thought there was an earthquake and left immediately. As soon as he came out he saw the tram had smashed the bus. "We immediately called the ambulance and fire department as there were passengers in both vehicles injured, including the tram driver," he said.

"Unfortunately, 33 of our fellow citizens were injured in the traffic accident that occurred at Alibeyköy Tram Stop this morning," Istanbul Governor Ali Yerlikaya shared on his social media account about the accident. He wished a speedy recovery to the citizens whose treatment continues.

In order to lift the bus with the crane and tow truck that came to the scene, rescue teams separated the bus into two parts from the bellows section. While the separated part of the bus was loaded onto the truck, work was started with the crane to place the tram on the rails.

A statement made by the Istanbul Metropolitan Municipality (IBB) said, "The T5 Tram line has been closed to two-way traffic."

Local business owner Bülent Kahveci said he arrived at the scene immediately following the accident. "It was clear that this would occur at some point. The signal was out of order for the past 10 days, and maintenance work was ongoing near an area of Istanbul that has the most traffic. Although it is in the IBB's records, they can examine the signaling errors but no proper repairs were made. We are residents here, and witnessing such events firsthand is disaster."