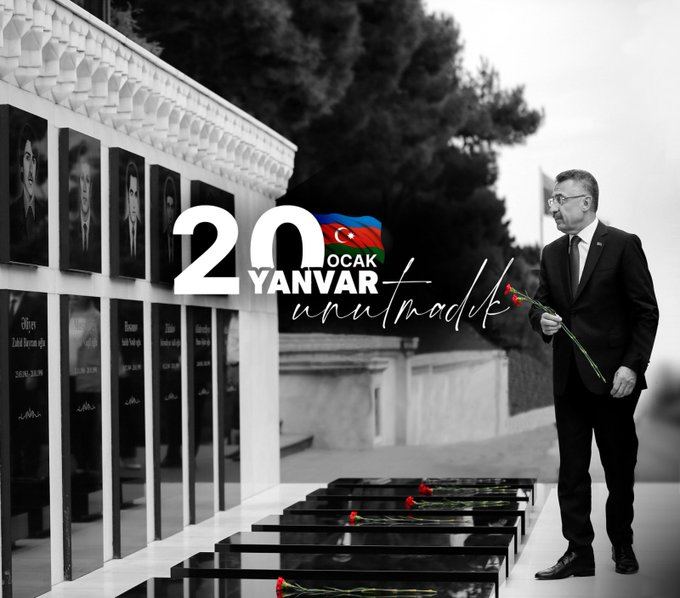 Turkish Vice President Fuat Oktay has honored the memory of the martyrs who gave their lives for the independence of Azerbaijan 33 years ago, AzVision.az reports citing a tweet of the vice president.

"May the Almighty rest the souls of the heroes whose pain echoes in our hearts. May Azerbaijan live forever," the tweet said.

On the night of January 19-20, 1990, as a result of military aggression of the units of the Soviet Army and special forces, civilians, including children, women and elderly were massacred in the cities of Baku, Sumgayit, Lankaran and Neftchala by order of the USSR leadership.

As a result of this military aggression, 149 civilians were killed, 744 were seriously injured, and 4 people went missing. The Soviet army was sent to the country in order to forcefully suppress the mass protests of the Azerbaijani people and the national independence movement started in response to the discrimination policy of the USSR leadership against the people of Azerbaijan, the deportation of hundreds of thousands of Azerbaijanis from their historical lands in the territory of present-day Armenia, and Armenia’s unfounded territorial claims against Karabakh committed an unprecedented massacre against the civilian population.

On January 21, 1990, immediately after the tragic events, at the Permanent Mission of Azerbaijan in Moscow, National Leader Heydar Aliyev, demonstrating his solidarity with the Azerbaijani people, strongly condemned this crime, demanding political and legal assessment of the massacre, and punishment of the perpetrators. At the special session of the Milli Majlis (Parliament) held in February 1994 the brutal killing of innocent people on 20 January 1990 was qualified as military aggression and a crime, and in March 1994 a decision “On the tragic events committed in Baku on 20 January 1990” was adopted. January 20 was declared National Mourning Day.