Exhibition dedicated to anniversary of January 20 tragedy held in Prague 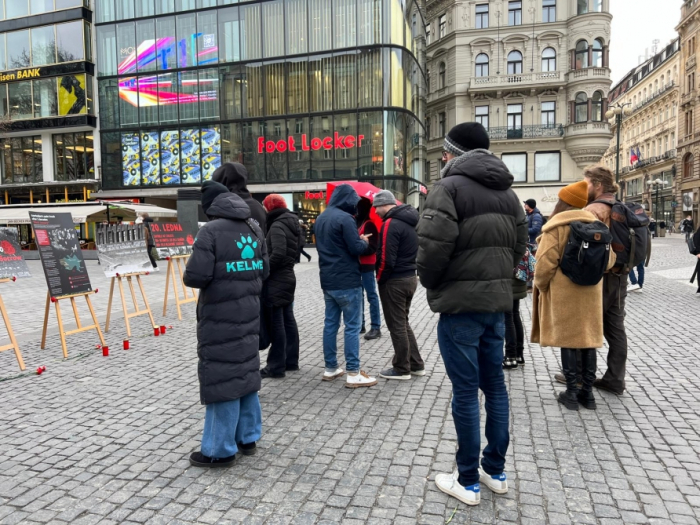 An exhibition dedicated to the anniversary of the January 20 tragedy was held in Wenceslas Square in Prague (Czech Republic), Azerbaijan's State Committee on Work with Diaspora told reporters.

The action was organized by member of the 'Elson Grand' organization, the Azerbaijani diaspora activist Farid Amiraliyev. Photographs, depicting the massacre committed by Soviet troops against civilians in the cities of Baku, Sumgayit, Lankaran and Neftchala 33 years ago by order of the USSR leadership, were exhibited during the exhibition.

The city residents were informed about the events of January 20, 1990.

The event devoted to the anniversary of the January 20 tragedy was also held in the Parliamentary Library of the Czech Republic, upon the initiative of Chairman of the Czech-Azerbaijan Union Eldar Valiyev.

The event was attended by the parliamentary library employees and compatriots living in the Czech Republic. While delivering a welcome speech, the chairman noted that January 20 events are one of the bloodiest pages in the history of Azerbaijan. On the night of January 19-20, 1990, the USSR leadership attempted to break the will of the Azerbaijani people, but in vain. This momentous event accelerated the fall of the communist regime and led to the independence of Azerbaijan and other union countries.

Valiyev pointed out that the brilliant personality, national leader Heydar Aliyev played a crucial role in making Azerbaijan's realities known to the world. On January 21, 1990, Heydar Aliyev, at the Permanent Mission of Azerbaijan in Moscow, declared solidarity with his people and resolutely condemned the Soviet leadership for the war crime committed.

It was also outlined that photojournalist of Azerbaijani origin living in France Reza Deghati was one of the international media representatives who brought the truth about the Baku events to the international community. The event participants were briefed on the work of renowned photojournalist Reza Deghati, who captured significant events that took place in the modern history of Azerbaijan.

Later, Reza Deghati's books "The Massacre of Innocents" and "Elegance of Fire" were donated to the Czech parliamentary library.

Furthermore, a documentary film about the January 20 tragedy, Reza Deghati's interview with CNN about these events, as well as the CNN report were shown at the end of the event.

On the night of January 19-20, 1990, as a result of military aggression of the units of the Soviet Army and special forces, civilians, including children, women and elderly were massacred in the cities of Baku, Sumgayit, Lankaran and Neftchala by order of the USSR leadership.

As a result of this military aggression, 149 civilians were killed, 744 were seriously injured, and 4 people went missing. The Soviet army sent to the country in order to forcefully suppress the mass protests of the Azerbaijani people and the national independence movement started in response to the discrimination policy of the USSR leadership against the people of Azerbaijan, the deportation of hundreds of thousands of Azerbaijanis from their historical lands in the territory of present-day Armenia, and Armenia’s unfounded territorial claims against Karabakh, committed an unprecedented massacre against the civilian population.

On January 21, 1990, immediately after the tragic events, at the Permanent Mission of Azerbaijan in Moscow, National Leader Heydar Aliyev, demonstrating his solidarity with the Azerbaijani people, strongly condemned this crime, demanding political and legal assessment of the massacre, and punishment of the perpetrators. At the special session of the Milli Majlis (Parliament) held in February 1994 the brutal killing of innocent people on 20 January 1990 was qualified as military aggression and a crime, and in March 1994 a decision “On the tragic events committed in Baku on 20 January 1990” was adopted. January 20 was declared the National Mourning Day.