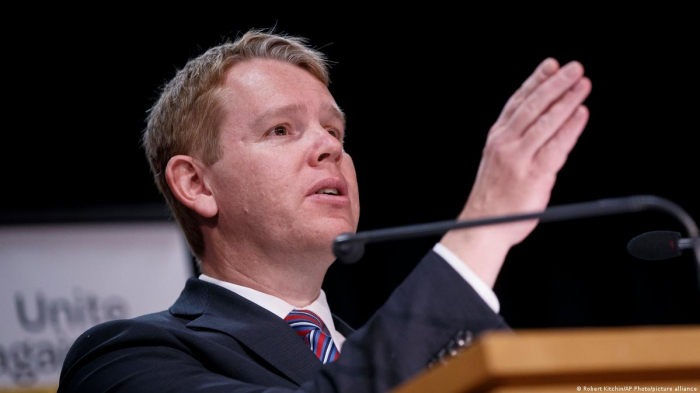 New Zealand's incoming prime minister has vowed to protect his family from what he called the "abhorrent" abuse that his predecessor, Jacinda Ardern, received while in office.

Ms Ardern announced that she was quitting as the country's leader on Thursday, citing burnout.

Threats against her became more frequent in recent years and included a man claiming he had the right to "shoot the prime minister" for treason and treachery in a YouTube video.

Chris Hipkins, who was speaking on Sunday after MPs from his ruling Labour Party voted unanimously to endorse him, said a "small minority" of Kiwis were responsible for abusing Ms Ardern.

He said that "it does not represent who we are as a country".

Men had a responsibility to call out misogyny, he added.

He said he realised that putting himself forward as leader meant that he was "public property" - but that his family were not, and he wanted his children to have a "typical Kiwi kid life".

Data released in June showed that threats against Ms Ardern had almost tripled over three years, and local media reported that at least eight threats against her had entered the legal system - including the man who filmed the threatening YouTube video.

Police also had to investigate after handwritten fliers vowing to "eradicate" Ms Ardern were delivered to several homes in January 2022.

He is set to be sworn in as prime minister on Wednesday after Ms Ardern formally steps down.

He received a standing ovation from his colleagues after they gave him their backing on Sunday, and shared a hug with Ms Ardern, whom he described as "my very good friend".

Mr Hipkins has named Carmel Sepuloni as his deputy, making her the first person of Pasifika descent to hold the role.

"I am proudly Samoan, Tongan and New Zealand European, and represent generations of New Zealanders with mixed heritage," she said. "I want to acknowledge the significance of this for our Pacific community."

Around eight percent of New Zealand's population identify themselves as being Kiwis with Pacific island descent.

Mr Hipkins will announce his full Cabinet later but has said he plans to keep the former deputy prime minister, Grant Robertson, on as finance minister.

Outlining his priorities as prime minister, he promised to help Kiwi families and businesses through the country's cost of living crisis - which will be a key issue in the general election later this year.