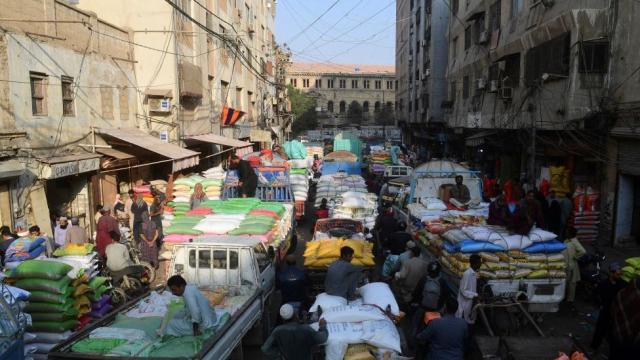 Power was out in all the country's major cities, including the biggest city Karachi, the capital Islamabad as well as Lahore and Peshawar.

He insisted this was "not a major crisis" and power would be back soon.

In a statement. the energy ministry said that at about 07:30 local time (02:30 GMT) the grid "experienced a loss of frequency, that caused a major breakdown", adding that "swift work" was taking place to revive the system.

Some grids in the country had already been restored and power would be fully restored in 12 hours, Mr Dastagir told Geo TV.

"In winter, the demand for electricity reduces nationwide, hence, as an economic measure, we temporarily close down our power generation systems at night," he said.

When they were turned on in the morning, "frequency variation and voltage fluctuation" were observed in southern Pakistan "somewhere between Dadu and Jamshoro" and subsequently "power generating units shut down one by one", he told the TV channel.

It means that across the country, traffic lights are down, fans have stopped and lights are off.

Many in Pakistan are used to dealing with fluctuating power supplies and load shedding - where electricity to some areas is temporarily reduced in order to prevent the failure of the entire system - is common.

Businesses, industries and homes often have their own generators which kick in when the electricity is cut.

Officials at Lady Reading Hospital in Peshawar, capital of Khyber Pakhtunkhwa province, told the BBC that hardly any department had been affected by the power cut because generators have been used to provide electricity to every department, including the emergency wards and intensive care units.

However, while hospitals and larger industries may have bigger generators, other smaller organisations or private homes will not necessarily have enough power to last for many days.

Earlier this month the government ordered shopping centres and markets to close early every day to save money on power.

Fuel crisis forces Pakistan malls to close early
Pakistan's reserves of foreign currency have been falling and the country generates most of its power using imported fossil fuels.