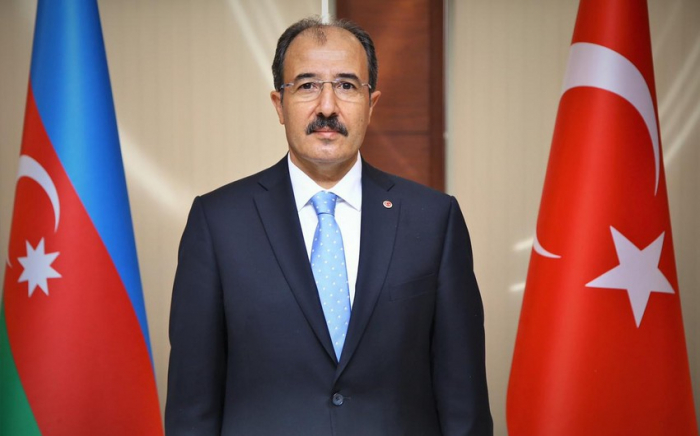 Turkish Ambassador to Azerbaijan Jahit Bagchi and the Secretary of the Embassy Zeynep Kivilcim have visited the Community of Western Azerbaijan (historical lands of Azerbaijan, currently - modern-day Armenia) in a new administrative building, AzVision,az reports.

The ambassador had a meeting with the Chairman of the Board of the Community Aziz Alekberli and other members of the Board. The Turkish ambassador was informed about the charter, structure, and activities of the organization.

Chairman of the Board Aziz Alekberli expressed his joy that the first representative of a foreign state to visit the community was the Turkish ambassador.

The Turkish diplomat was provided with information about war crimes against Azerbaijanis and humanity in general committed in the last century, as well as about the deportation of the Azerbaijanis from their motherland, the territory that is now called Armenia.

During the meeting, the ambassador was informed that the Armenian government refuses to take measures to restore the rights of exiled Azerbaijanis and continues to deprive them of the opportunity to reside in their homeland.

It was noted that the support of the international community is needed to ensure the recognition of the rights of the exiled Azerbaijanis within the Universal Declaration of Human Rights and other international conventions.

In turn, Bagchi noted that Türkiye has always been there for Azerbaijan in the just struggle, and with the signing of the Shusha Declaration, relations were brought to the allied level. Then the ambassador got acquainted with the administrative building of the Community.

Shusha Declaration, signed by President of Azerbaijan Ilham Aliyev and President of Turkiye Recep Tayyip Erdogan on June 15, 2021, has taken its place in history as an important document demonstrating the current level of Azerbaijani-Turkish cooperation.