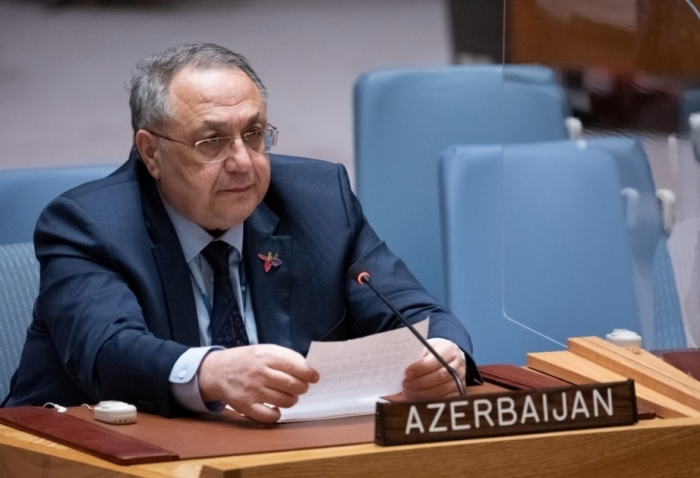 A letter of Permanent Representative of Azerbaijan to the United Nations Yashar Aliyev addressed to Secretary-General António Guterres has been circulated as a document of the UN General Assembly and Security Council, AzVision.az reports.

The letter says: “In reference to our previous communications, I am writing to update you on Azerbaijan’s efforts to establish the fate of several thousand of its citizens who went missing during the aggression of Armenia since the early 1990s.

The unlawful targeting of Azerbaijani civilians and peaceful settlements, the taking and holding of hostages, the mistreatment and summary execution of prisoners of war and civilian detainees, ethnic cleansing, the extensive destruction of inhabited areas and civilian infrastructure and the desecration and eradication of Azerbaijani cultural and religious heritage were the methods and means deliberately used by Armenia to achieve its military objectives.

The tragic consequences of the aggression include 3,890 missing citizens of Azerbaijan, including 719 civilians. Among the civilians, 71 are children, 267 are women and 326 are elderly.

It was established that 872 persons (605 servicemen and 267 civilians, including 29 children, 98 women and 112 elderly) were taken either as prisoners of war or hostages. Despite the fact that they were seen alive at the moment of captivity, their whereabouts are unknown.

Moreover, dozens of Azerbaijani detainees died or disappeared in Armenian custody even after being visited by the International Committee of the Red Cross.

The territories of Azerbaijan liberated from occupation at the end of 2020 provided compelling evidence of gross and systematic violations of international law by Armenia.

Remains presumably belonging to 118 persons were discovered in mass graves in these territories between February 2021 and November 2022. These graves shed light on the wilful killing of Azerbaijani civilians and other persons protected under international humanitarian law.

A mass grave discovered in a mountain cave near the village of Bashlibel (Kalbajar district) revealed that the armed forces of Armenia fired directly upon the villagers hiding in the cave, killing at least 12 of them, including 2 children and 5 elderly.

The remains of children and women were also found in a mass grave in the village of Farrukh (Khojaly district).

Another source of evidence of extreme brutality are the mass graves discovered in the village of Edilli (Khojavand district), which hold the remains of a dozen Azerbaijanis whose hands and feet were bound with wire and rope, indicating their summary execution.

Mass graves were also discovered in other liberated districts of Azerbaijan.

For almost 30 years of war and occupation, Armenia refused to account for the missing persons or to conduct investigations into their fate.

Only in 2022, Armenia handed over to Azerbaijan 67 bags containing mixed remains belonging to 106 persons. It cannot but cause deep indignation that Armenia has kept these remains for three decades, contrary to all moral canons, in violation of international humanitarian law and in open contempt for the right of families to know the fate of their loved ones.

Moreover, Armenia continues to refrain from providing information on the locations of mass graves in the liberated territories of Azerbaijan.

Ongoing search operations carried out by Azerbaijan are also hampered by a serious mine threat, while Armenia refuses to provide complete and accurate maps of hundreds of thousands of mines that it planted in the territories of Azerbaijan during their occupation.

Both the General Assembly and the Security Council have adopted a series of resolutions on missing persons, reaffirming the obligations of States under international humanitarian law to prevent enforced disappearances and to account for missing persons. The rights of the victims and their families require these obligations to be translated into immediate action.

It is important that the international community insist on Armenia’s strict compliance with international law by effectively investigating and prosecuting serious violations committed by its armed forces during the aggression, as well as by providing information about the missing persons, the location of remains and any undisclosed mass grave sites, and complete and accurate maps of the minefields that it had laid in the territory of Azerbaijan.