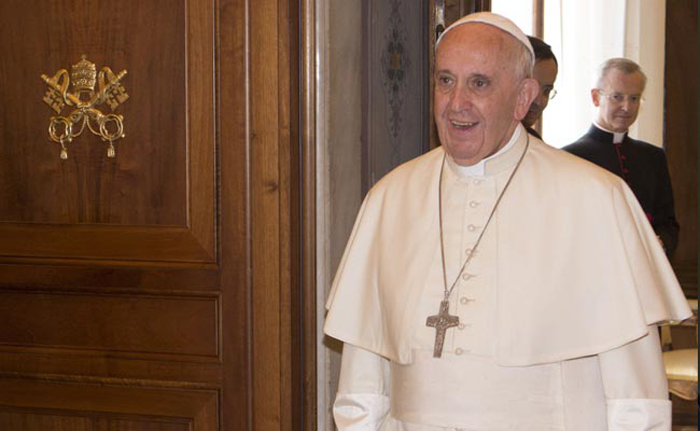 Cuban dissidents hope Pope Francis will use his upcoming visit to pressure the government on human rights, but they aren`t holding out hope for any miracles from the communist regime.
The pope will give eight speeches or homilies during his four-day visit to the island and there will likely be at least a veiled reference to the state`s crackdowns on dissidents and restrictions on civil liberties.

But members of Cuba`s fractured and officially illegal opposition said they see little chance that the trip will bring significant change.

"Pope Francis wants his visit to have a major impact, but he won`t be able to work any miracles, because change depends on the Cuban government`s political will. And it has none," said Elizardo Sanchez, president of the Cuban Commission on Human Rights.

The pope will also meet Cuban President Raul Castro during his visit, though no meetings with dissidents are on the agenda.

Jose Daniel Ferrer, another leading dissident, said he was not expecting any sea changes, but is "hopeful that the pope will demand more democracy and respect for human rights from the government, even if he does it in private."

There is papal precedent on these delicate issues as Francis heads to Cuba Saturday, the third pope to visit the island in 17 years.

John Paul II called for greater respect for human rights during the first papal visit to Cuba in 1998, a historic trip that symbolized a nascent rapprochement between the Church and the one-time atheist state.

In 2012, Pope Benedict XVI criticized Marxism and spoke of the need for "new models."

But Berta Soler, the leader of the Ladies in White, one of the island`s most visible dissident groups, said she feared the issue of human rights would be eclipsed by talk of the pope`s role in negotiating the recent thaw between Cuba and the United States -- the other country on the pope`s itinerary for his eight-day tour.

"People talk a lot about the rapprochement (with the United States), but nobody says anything about repression, justice, freedom," said Soler.

She voiced frustration that "neither the Catholic Church hierarchy nor the local Church have spoken out on repression."

In an act of goodwill before the visit, Cuban authorities released more than 3,500 prisoners last week, amplifying a gesture also undertaken for the previous papal trips.

But dissidents complained the measure did not free any of the 60 political prisoners they say are currently in custody.

Cuban authorities dispute that figure, saying the 53 inmates freed in January as part of Havana`s negotiations with Washington were the last political prisoners on the island.

Dissident blogger Yoani Sanchez wrote that she feared the visit would unleash "a repeat of the repression seen during Benedict XVI`s visit," when 150 dissidents said they were preemptively arrested to prevent them from pulling any political stunts.

Amnesty International, which has been barred from Cuba since 1988, said Thursday that advances have been made there, including a 2013 reform loosening travel restrictions and the release of political prisoners.

"However, the country still needs to make progress when it comes to allowing people to peacefully express their views without fear of being harassed, detained or attacked," said Erika Guevara-Rosas, the rights group`s director for the Americas.