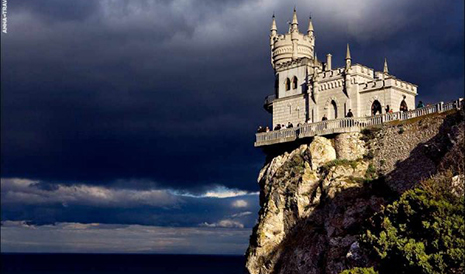 A few people may remember the statement by Alexander Gorban, a Russian Foreign Ministry official, back in January: “You cannot be a little pregnant,” he said in reference to Ukraine`s choice between the European Union and Moscow-led integration projects.

At that time, there was little doubt that Ukraine would turn away from European integration, but since Armenia`s U-turn -- deciding to joining Moscow`s Customs Union -- there has been growing concern about Moscow`s capacity to pressure its “near abroad.” Both Brussels and Kyiv are aware of this.

Kyiv still faces several barriers to concluding an Association Agreement (AA) and a Deep and Comprehensive Free Trade Agreement (DCFTA) trade agreement. The most contentious of these is releasing former Prime Minister Yulia Tymoshenko from prison.

However, after several secret meetings with Vladimir Putin two weeks before the summit of the Eastern Partnership in Vilnius, President Viktor Yanukovych unexpectedly put forward a new demand to Brussels: to indemnify the Ukrainian economy if the AA is signed. Regarding this development, Carl Bildt, the Swedish foreign minister, reflected the following: “We [Brussels] have a policy; I`m not sure he [Yanukovych] has a policy.” But based on Ukraine`s economic difficulties, Yanukovych put forth two arguments:

First, Ukraine`s domestic products are not in demand in EU markets, but despite this Ukraine must still adapt to EU technical regulations. As stated by Prime Minister M. Azarov, this will cost about 165 billion euros -- money Kyiv does not have.

Second, due to difficulties in relations with Russia, Ukraine has already lost over $15 billion, mostly as a result of trade blocks imposed by Moscow. Future sanctions by Moscow -- and also Minsk -- could cause the economic situation to become even more desperate. Economic development in 2014 will depend on how Kyiv negotiates its relationship with Russia right now.

There is speculation that Yanukovych`s equivocation on EU economic standards is driven by his desire to consolidate his power in the 2015 elections with political and financial support from Putin. Whether this speculation is valid is not crucial -- no one expects to see an “anti-Kremlin” hard-line from Ukraine. But if -- and unfortunately this is not a big “if” -- the Kremlin succeeds in thwarting the agreement, the loss for the EU will be far greater than free trade with Ukraine.

Risk that the Vilnius Summit will be another Bucharest: At the 2008 NATO Bucharest Summit, a number of European states opposed Georgian and Ukrainian membership, on the grounds that it would unnecessarily anger Russia. The 2008 Russia-Georgia war provided support for that view. EU integration, on the other hand, seemed like a “safe” road toward European integration. Unfortunately, this turned out to be an overly optimistic view. Now, backers of EU integration do not want Vilnius to become a second “Bucharest,” where Moscow`s political power reveals the limits of the EU.

Kyiv`s accession to the EU is more than a shield for other post-Soviet countries: If Kyiv signs the Association Agreement and the DCFTA at the Vilnius Summit, it will give other regional countries, and in particular Azerbaijan, an argument to reject membership in Moscow`s Customs Union. More than that, if Kyiv does not sign the agreements, Moscow`s economic and political authority in the post-Soviet area will be consolidated. EU bureaucrats should remember that Moscow ultimately does not have the finances to support the type of (re-)integration it envisages and that the Customs Union is just one pillar of the Eurasian Union initiative -- the ultimate goal of which is political hegemony.

The failure of the Eastern Partnership Format: Some will say that this is an exaggeration, given that Moldova and Georgia will conclude the AA and DCFTA agreements, declaring that the failure by other Eastern Partnership (EaP) members to sign the agreements largely depends on their domestic policies. The critical thing here is that Ukraine`s accession will boost the success of EU integration, and there are a number of politicians and parties who need an EU foreign policy success against the background of economic threats. Regarding the requirements for EU integration, while the EU sees the Tymoshenko case as an example of “selective justice,” Ukraine failing to accede to the EU will be viewed as “selective justice” in geopolitical term by EaP countries.

The easy route, as one Ukrainian opposition leader suggested, is “if necessary, to make an exception and sign an association without addressing Tymoshenko.” At this stage in the game, many are asking whether there is a “neutral,” third way for Ukraine?

Yanukovych`s dream scenario is having it all: Ukraine retaining its observer status in the Customs Union but gaining special terms, enjoying a free trade regime with CIS countries, and signing the EU Association Agreement -- i.e., securing a balancing act between Moscow and Brussels. This third way was raised by some experts following a visit by the Azerbaijani president on Nov. 18-19 to Kyiv, during which the parties signed an agreement on the use of steel produced by Ukrainian companies in the construction of the TANAP pipeline, as well as SOCAR`s possible use of Ukrainian underground gas storage. However, for now, the agreement did not include sales of Azerbaijani gas to Ukraine. Some observers assessed the visit as a joint balancing act against Moscow`s pressure -- a demonstration of solidarity. However, Baku`s involvement cannot provide a short-term solution to Ukraine`s dilemma (the choice between Moscow and Brussels) for the simple reason that there isn`t enough money available. Azerbaijan cannot compensate Ukraine for the financial losses it faces from Russian trade blocks. At the same time, Baku is aware that its own long-term balancing act between the West and Russia depends on Ukraine`s choice; Kyiv`s success could strengthen Baku`s independence. But if Ukraine joins the Customs Union, Moscow will increase pressure on Baku to do the same.

Thus, the answer to the question “Why save Ukraine?” is quite clear for the EU, and as its future relations are with post-Soviet countries, Brussels should review its rescue plan in haste and “save Ukraine” before Moscow does.