Military cooperation and security policies of Azerbaijan and Turkey 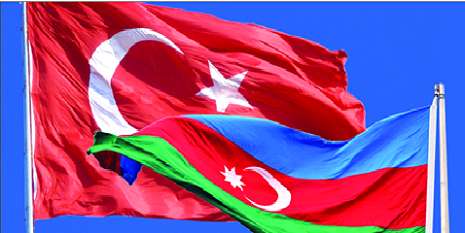 Although military cooperation between Azerbaijan and Turkey dates back to the early 1990s, it eventually failed to progress in parallel with the security paradigm emerging in the world and the region. There has been an enormous security void in the South Caucasus for the past 20 years. Russia, U.S., Turkey and Iran were unable to implement an effective policy sufficient to fill that void in the wake of the Soviet Union`s collapse.


Despite Russia`s pressure to ensure Azerbaijan`s membership in the Collective Security Treaty Organization, the former refused to do so and opted to build and expand ties with NATO. However, once it was realized that broadening of cooperation with NATO also provided no room for resolution of the Nagorno Karabakh conflict, the cooperation saw neither breaking point nor new heights.


Analysis from today`s perspective reveals coinciding interests of Azerbaijan and Turkey in the South Caucasus while Georgia can also be viewed as another link in the cooperation chain. Turkey claims that it wields clout in the security environment of the South Caucasus owing to the Kars Treaty of 1921. Although the word "guarantor” was omitted from the text, Chapter 6 described Turkey as a guarantor state for Ajaria. Despite that, it was thought-provoking that Turkey remained silent when Georgia eventually abolished Ajaria`s autonomy. Turkey`s silence on the issue would solidify Armenia`s position since former refuses to recognize the Kars Treaty.


Such a situation has drastically curbed Turkey`s influence over Georgia as Ankara had unilaterally given up its right, underpinned by the international law. Turkey`s idleness on this issue is a negative aspect for Azerbaijan as well. It is unclear what Turkey`s position would be in the event of some sort of status change issue for Nakhichevan coming to agenda. Should Turkey continue to remain indifferent, similar to its conduct with the Ajaria case, Ankara`s position in the South Caucasus would be significantly undermined. According to Kars Treaty abolishment of Ajaria`s status implies that Turkey becomes a guarantor state for Nakhichevan – its sole internationally legal mainstay for presence in the South Caucasus.


3. Military cooperation between Azerbaijan-Turkey and other Turkic nations and its prospects


Military cooperation between Azerbaijan and Turkey was launched with signing of a respective agreement in 1992 while additional arrangements had been made in the following years. Maiden mission of Azerbaijani peacekeepers within a Turkish peacekeeping contingent in Kosovo stemmed from the agreement signed between the two countries in 1999. Signed military agreements encompass different areas of military cooperation – military education, military assistance, arms and ammunition acquisition, joint arms production. Notwithstanding, lack of comprehensive defense agreement may be viewed a serious strategic detriment.
Indeed, there are countries that would be troubled by the signing of such an agreement and they will fiercely oppose it and do their utmost to prevent it. However, security concerns both in the region and on the global scale make the signing of defense agreement a must. If parties demonstrate common political will, all the obstacles and impediments can be easily defied.


Although two nations have signed the "Agreement on strategic cooperation and mutual assistance between Azerbaijan and Turkey” on 16 August 2010, it proves to be insufficient for security and defense areas. The agreement was ratified by the Parliament of Azerbaijan on 22 December 2010 and by the Grand National Assembly of Turkey on in March 2011. This agreement shaped a framework for cooperation in the security field between the parties.


Military cooperation may undergo certain changes under the influence of the political processes developing in the region and on the international arena. It is now that the policies of Russia and the U.S. (West) towards the South Caucasus and Turkey and Azerbaijan in particular, have to be carefully analyzed. The U.S. (West) aims to gain prominence by forwarding different initiatives in the region, prioritizing economic factors, whereas unlike the West, Russia adheres to its traditional policy of employing political, economic and military prowess to preserve its clout in the region.


Military cooperation between Azerbaijan and Turkey must not be restricted, to arms trade, joint exercises, joint production and missile and space technologies, and has to be pursued in the defense field as well. Bolstering of cooperation in the defense industry area is another crucial component of military cooperation. Both nations are endowed with the human capital to develop its arms production independently from other nations. Legal and technical infrastructure is what the parties need to champion this sector.
Dependence on other countries is a serious handicap in pursuing military cooperation between the two nations. One of the examples is when Turkey wanted to sell Azerbaijan the "Firtina – T155” self-propelled howitzers, the "MTU” - German manufacturer of its engines, thwarted the deal by citing Nagorno Karabakh problem. Enduring independence of this industry and production of key components in either Turkey or Azerbaijan would certainly provide advantage. And it is by striving to achieving quality to match international standards that countries may solidify positions on the arms trade market and significantly reduce the price for manufactured weaponry.