Lermontov Is Celebrated in Scotland, a Land He Never Saw 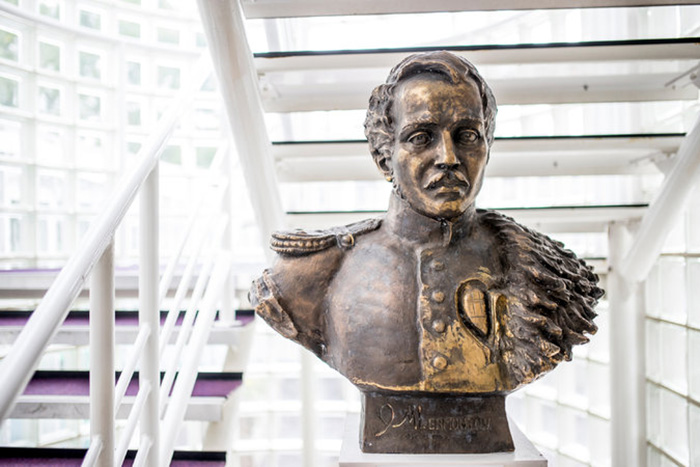 Poetry has been a part of life in Earlston since the days of Thomas the Rhymer, a 13th-century bard who, according to legend, could foresee bloody battles, royal deaths and even the union of Scotland
But not even Thomas could have predicted that this small village, in a lush Scottish valley, would one day lay claim to one of Russia’s greatest poets: Mikhail Lermontov.

On Saturday, a bronze bust of Lermontov, whose verse is considered by many Russians as second only to Aleksandr Pushkin’s, will be unveiled on the tidy village green. There will be Russian and Scottish dancing, poetry readings and Russian guests — including at least one descendant of Lermontov, whose modern-day family has created and officially registered its own tartan.

Lermontov, who died in a duel in 1841 at age 26, never got to see Scotland. But he was a descendant of a Scottish soldier of fortune, George Learmonth, who settled in Russia in the early 17th century and adapted his name to Lermontov.

Though the earlier genealogy is murky, Learmonth is believed to have been a descendant of Thomas de Ercildoune — around whom the legend of Thomas the Rhymer is based — who lived in what is now Earlston in the 13th century.

Lermontov cherished the Scottish connection and was influenced at least indirectly by the folklore surrounding Thomas the Rhymer, who was said to have attained his prophetic powers after spending seven years under the spell of a faerie queen.

Scotland is mentioned in at least two of Lermontov’s poems. In “Yearning,” a raven flies over the land of his Scottish forebears:

Westwards, ever westwards would I fly,

Where flourish the lands of my forbears,

Where in an empty castle, on mist clad mountains,

The village of Earlston, Scotland, was the home of Thomas the Rhymer, a 13th-century bard who influenced the Russian poet Mikhail Lermontov, a descendant of a Scotsman. Credit Andrew Testa for The New York Times
Rest their forgotten remains.

Lermontov also admired Sir Walter Scott, who was inspired by the legends surrounding Thomas the Rhymer.

That poetic connection made Earlston a logical place to commemorate Lermontov’s Scottish link. John Paton-Day, the chairman of Earlston’s community council, said its population of less than 2,000 has welcomed the initiative.

“I have heard no voices against it at all,” he said. “People have taken it to their hearts.”

Next to the ruins of the reputed home of Thomas the Rhymer, John McKee, the owner of the Rhymers Tower Restaurant, said that the bust had stirred interest in the village. One of the goals of the event is to draw more tourism.

“There have been a few Russian customers in here,” he said. “They have obviously heard about the place, read about it and made their way here.”

Lermontov’s link to Thomas the Rhymer remained obscure here until 2011. One day, Gwen Hardie, who leads a group in Earlston that promotes awareness of Thomas the Rhymer and who helped organize the installation of the bust, answered her door to two visitors from Russia, one of whom was researching a book on Lermontov.

The next year, Ms. Hardie had another Russian visitor, Maria Koroleva, who is a descendant of Lermontov through her maternal line.

So intrigued was Ms. Koroleva by Lermontov’s Scottish connection that she learned Scottish Gaelic (spoken by about 58,000 people, about 1 percent of Scotland’s population), changed her first name to a Gaelic variant, Màiri Òg, and now teaches the language at Moscow State University.

However, building a Lermontov memorial did not prove straightforward. The first prototype had to be abandoned because it would have been 15 feet tall — suitable, perhaps, for a broad Moscow boulevard, but not for Earlston’s village green.

Then plans for a more modest bust failed when Russian funding fell through, Ms. Koroleva said.

“I even went to church and prayed for the money,” she said. “I said to Lermontov, ‘You wanted to go to Scotland, so help me!’ ”

Soon someone did. A sculptor, Stepan Mokrousov-Guglielmi, offered to work without payment, and Ms. Koroleva raised around 400,000 rubles (about $6,000) for the bronze.

Even then, a technical error in the planning application caused the full unveiling to be postponed until now, a year after the 200th anniversary of Lermontov’s birth. Nevertheless, the project has already bound Scots and Russians together.

It is as if “one of our sons has come home,” Ms. Hardie said.

Ms. Hardie says she too is descended from the Learmonths, giving her, “in a roundabout way,” a place in the extended families of Thomas the Rhymer and Mikhail Lermontov.

A poet and novelist who runs a bed-and-breakfast here, Ms. Hardie has written an interpretation of Lermontov’s “Yearning” from English translations.

Ms. Koroleva considers Ms. Hardie part of her extended family, and someone who helped achieve something Lermontov never had time to do in his short, turbulent life.

“He really wanted to come to the land of his ancestors,” Ms. Koroleva said. “If we bring him in the form of a monument, it would be a consolation. We will have fulfilled his dream.”