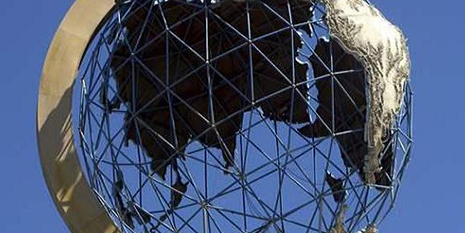 Geopolitical volatility reigns over a vast region extending from the Middle to the Far East. Confrontations, terrorism and militarized strife engulf certain regions, and there are no viable plans aimed at their prevention. Scrutiny of the developments reveals lack of ideas to enable just resolution of the problems. Is situation completely hopeless?

Notable geopolitical processes are developing throughout a geographic space – from Mediterranean to the shores of the Indian Ocean. Conflicts emerging here entail global scale problems. Some analytical centers blame radical Islam for the extent of exacerbation of the problem whereas in reality, number of factors associated with the situation must not be ignored.

It is either naivety or biasness to single out Islam in the historical phase of globalization, distinguished by political transformation, geopolitical renewal and national state building. An approach to the problem from this perspective requires profound analysis of factors that underpin articulation of radical Islam in a vast geopolitical space. Using a same template with respect to all the countries, from North Africa to Indian Ocean, and associating all the problems they encounter with religion symbolizes a dangerous trend.

First – real problems of modern geopolitics are being concealed that instead of being addressed, something that leads to more complex situations. Second – hatred among people is shaped based on religious affiliation. That is when dialogue between civilizations and cultures is gravely impaired. From this perspective, analysis of the nature of strife in a geopolitical space spreading from Syria to Afghanistan exposes provocative elements imposed from abroad. Proponents of such an approach are aiming to employ a "self-devised`` theoretical model for the Central Asia and the Middle East. To name it precisely, with modest changes the "telling arguments`` fabricated for Iraq and Egypt are now applied with regard to the Central Asia. What aspects are thus being highlighted here?

Radical Islam, politicization of the religion and presence of terrorist groups are suggested as factors provoking domestic political and regional geopolitical problems in Iraq, Syria and Egypt. By this logic, as a religion, Islam rests in the core of emerging geopolitical problems in the Middle East (whereas Christians populate the region and are always described as victims), meanwhile groups driven by the Islamic ideology and terrorist organizations – combination of both, constitute the political force.

Now, this model is gradually imposed on the Central Asia with key argument being the withdrawal of the U.S. troops from Afghanistan in 2014.

Western and Russian analysts use this aspect as a launching point and attempt to explain potential problems region may face from the perspective of psychological complexities of radical Islam, confessional segregation and pursuit of the political agenda by the terrorist organizations. Fellow at the Carnegie Center, Aleksey Malashenko makes it obvious in his analytical piece (see Алексей Малашенко. Афганистан после ухода США: проигравшие и победители / www.carnegie.ru, 24 October 2013). He goes through positive and negative aspects of the America`s troop withdrawal from Afghanistan. Russia and Central Asian states are described as gainers. There is not much difference for China and India. Threat risk increases for such countries as Pakistan and Iran.

International relations and principle of justice

According to Malashenko, Islamabad may find itself between "Taliban hammer and post-Karzai anvil`` (see previous article). In the meantime, America`s geopolitical image is fading. However, the main theme of the article is that radical Islam will provoke complexities in Afghanistan`s political life. Therefore, the West, Russia, China and India have to be ready for Taliban`s return to power – development to boost Pakistan`s prominence in the region.

In her article in the "Washington Post``, Jessica Mathews raises the issue of "Iraqi lessons``. According to the author, the West must learn from the mistakes made about Saddam Hussein; namely, to secure comprehensive international support on Syria, Iran and Central Asia (see Jessica T. Mathews. We can stop Syria by using lessons from Iraq / www.washingtonpost.com, 13 September 2013).

Such ideas are frequently conveyed in conclusions of Western, Russian and Chinese experts. What is the evident trend here? Frankly, such posture is a source of threat to international relations. Associating the years-long conflicts and possibly renewed strife in a vast geopolitical space with particular religious outlook means foredooming problems` resolution. Moreover, if the Western mindset persists to present Islam from the aspect of radicalism and terrorism, it paves the way for future conflicts. This attitude, figuratively speaking, is not "promising salvation`` for the world in general.

It must be noted that Caucasus occupies a particular position in the given geopolitical space. Let us imagine that in Afghanistan the struggle between the West, Russia and China over the military clout in the Central Asia enters a new phase in the wake of the U.S. withdrawal from Afghanistan in 2014. Moscow is already boosting its military presence there. China inclines towards rendering military assistance along with political, economic and cultural-humanitarian influences. Beijing is expected to become reinvigorated in this direction.

Naturally, Washington and Brussels are not going to remain as spectators here. They will employ different means for solidification of their positions in the Central Asia. Nobody can exclude that radical religious groups operating under a disguise of Islam will not be used for intelligence purposes. Saudi Arabia factor must not be totally dismissed. Therefore, one may presume that geopolitical tensions in the central Asia may only rise after 2014, in various aspects leading to more fierce conflicts.

Can the aforementioned affect Caucasus? As far as we understand – yes it is possible. Radical religious groups with links to the Central Asia would not remain idle. Armenian terrorist groups also need to be dully considered. May be indirectly involved, they will surely be the ones "adding fuel to the fire``. Apparently, if the arguments suggested by the analysts become viable geopolitical factors, then more trouble awaits humanity. It questions the ability of geopolitics to fully tackle the task of establishing a new world order, meaning that both theory and practice would suffer.

Nevertheless, it would be wrong to believe that the situation is totally hopeless because new geopolitical forces are emerging, being in a position to thwart unjust ambitions of the big powers. Still, it would require devising new forms of regional cooperation centered on the criteria of justice and objectiveness.

It is time that the international organizations block geopolitical and political actions that provoke emergence of the conflicts. In other words, it must not be about creating conflict and then searching the way to resolve them. There is a need for an international mechanism that would preclude the conflicts, implying transition to essentially a new geopolitical environment. We believe it would be efficient to work in that direction instead of besmearing Islam.