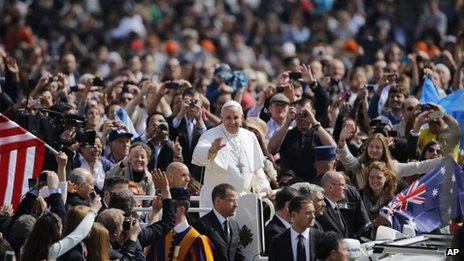 The Pope held his first general audience in St Peter`s Square on Wednesday
Pope Francis will wash the feet of prisoners in a youth detention centre near Rome on Maundy Thursday.

Thousands of pilgrims and tourists are arriving in Rome to attend ceremonies during the holy week ahead of Easter.

The washing of feet on the Thursday before Easter is a Christian tradition commemorating Christ`s Last Supper.

It is part of a papal calendar of events running up to Easter, the most important festival in the calendar of the Catholic Church.

On Easter Sunday morning, the new Pope will deliver his first "Urbi et Orbi" message to the city of Rome and to the world.

During his inaugural general audience Wednesday, Francis called for an immediate political solution to the conflict in the Central African Republic after last weekend`s coup.

Gesture of humility
The new leader of the world`s 1.2bn Roman Catholics has brought a new sense of simplicity to the Vatican, reports the BBC`s David Willey in Rome.

He has decided to live in a small suite in a residence for clerics, eating with other priests in a common dining room, after deciding not to move into the palatial apartments occupied by his predecessors in the Apostolic Palace.

He has again broken with tradition for the foot-washing ceremony, which is normally performed on lay people in one of Rome`s basilicas.

This time the Pope will visit the Casal del Marmo detention centre on the outskirts of Rome.

Pope Benedict XVI visited the centre in 2007, but not for the Holy Thursday Mass. Only for the first two years of his pontificate did he perform the feet-washing himself, after which the task was delegated to priests.

During the service, the pope washes and kisses the feet of 12 people to replicate the Bible`s account of Jesus Christ`s gesture of humility towards his 12 apostles on the night before he was crucified.

Some of the young detainees volunteered to have their feet washed, while others were given an invitation to help them overcome their embarrassment, the Catholic News Agency quoted the prison chaplain as saying.

On Good Friday evening the Pope will carry a wooden cross and pray at a ceremony at Rome`s ancient amphitheatre, the Colosseum, commemorating Jesus` crucifixion.

Pope Francis - renowned for his modest former life as bishop of the Argentine capital Buenos Aires - refuses to be awed by the magnificent surroundings of his new Vatican City home, visited every year by five million tourists and pilgrims, our correspondent says.

Some past popes vaunted their riches, but Francis wants a simpler church mindful of the plight of the world`s poor people, he adds.