Ukraine in the geopolitical risk zone: A never ending road 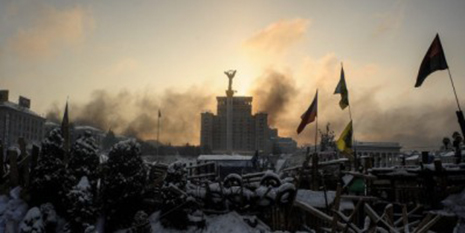 One of Eastern Europe`s largest countries of has plunged into geopolitically complex circumstances. Since November of the last year, the streets of Kiev have become a battleground for political forces. Authorities and opposition have different understanding of the country`s political course. However, with fierce struggle ongoing, they have handful of options to resolve their differences. External forces are evidently playing leading roles in this process as Ukraine seemingly submerges into deeper strife. What are the possible outcomes of this situation?

Other side of the barricades: clandestine fight of the great powers

Development of serious geopolitical processes in Ukraine is acknowledged by all. Media is widely reporting on complexities and contradictions, and eminent experts and analysts provide their insight on the situation in the country. Nonetheless, one issue is certain: it is unclear where this thought-provoking geopolitical process is taking Ukraine?!

Uncertainty is evident both in the performance of the political players and geopolitical situation in general. Experts attribute it to the external interferences. In his article in the "Guardian”, Seumas Milne concludes: "… continuing outside interference is both provocative and dangerous` (see: Seumas Milne. In Ukraine, fascists, oligarchs and Western expansion are at the heart of the crisis / www.theguardian.com, January 29, 2014).

"Stratfor” founder George Friedman also offers fascinating opinion on the role of the West and Russia in the processes in Ukraine. He believes that Ukraine is important from two aspects – geopolitical and economic. This is the very motive that underlies contradictions emerging around this country. It is thought-provoking that both Europe and Russia are deeming loss of Ukraine a threat to its security.

In this connection, G. Friedman refers to Vladimir Putin when saying: "…his goal is to prevent Ukraine from doing things Russia does not want it to do. Ukraine can be sovereign except in matters of fundamental importance to Russia` (see: George Friedman. Perspectives on the Ukrainian Protests / Geopolitical Weekly, 28 January 2014). Despite all of this, G.Friedman maintains that U.S. and Europe will be reluctant to harm relations with Moscow over the Ukraine issue (see previous source).

Indeed, neither the West nor Russia or China is willing to conceal their geopolitical aspirations. If Moscow is being explicit about it, Europe is citing "objective arguments` to underpin Kiev`s natural right (see: Daniel Brossler. Warum es in der Ukraine um Europas Zukunft geht / www.sueddeutsche.de, 23 January, 2014). Undoubtedly, if Ukraine is viewed as vital for the fate of Europe, the latter will fight till the end. In the meantime, Kremlin and Beijing appear poised to hold their ground. Official Moscow issued several warnings to Kiev recently. President Putin and Prime Minister Medvedev put the issue of gas price reduction and loan provision on hold until the "situation in Kiev clarifies`. Aid to the Russian President, V.Glazyev advised V. Yanukovich to "suppress the mutiny" (see: Советник Путина рекомендует Януковичу "подавить мятеж` / www.gazeta.ru, 31January, 2014).

Along with external interference, it is the lack of homogeneity within the Ukrainian opposition that also fuels contradictions. According to the experts, V.Klichko (democratic reformists), A.Yatsenyuk (Y.Timoshenko supporters) and O.Tyagnibok (radical right-wing) form a temporary alliance on Maydan (see: Якоб Мишке. Андреас Умланд. ЕС и российско-украинский конфликт / "Geopolitika.lt`, 28 January 2014). Therefore, once the crisis in the country comes to an end, differences will be inevitable.

"No” to dialogue and "Yes` to civil war?

The point is that Ukrainian opposition is pro-Western. They demand establishment of the presidential-parliamentary system in the country. This is why the opposition leaders rejected Yanukovich`s offer of high government positions. They have made it clear that "the governance system must change`. Thus, the only bond to keep the opposition`s integrity is the idea of European integration. Interests collide throughout the process, entailing major contradictions. Let us not forget that Ukrainian opposition formed armed militia groups to buttress political demands. Seizing of several ministry buildings, clashes that occurred during the attacks, as well as death of several protesters and the policemen signaled disturbing perturbations.

The West and Russia pursue their individual agendas on the backdrop of above described events. In fact, Ukraine is stuck between two great geopolitical powers (see: Николай Малишевский. Украина. "Война впотьмах` / Фонд Стратегической Культуры, 28 January 2014). Europe`s warnings, calculated to pressure Kiev, are coupled with Moscow`s practical actions at the customs checkpoints. The outcome of this standoff is beyond prediction.

Interestingly, renowned Western experts unequivocally accuse Kremlin for the events in Ukraine. In his "Twitter` blog Zbigniew Brzezinski wrote: "Russians wake up! Russia-backed repression in Ukraine will turn eventually into a disaster for Russia itself`. Apparently, political quarters of the West acknowledge the ongoing struggle for geopolitical influence in Ukraine. Some experts even insist that unlike in Syria, the West cannot afford failure in Ukraine.

This indicates a complex and fraught with risks type of situation at hand in Ukraine, where a two great geopolitical agendas form a fault line. They will hardly conceit. The chances of Yanukovich`s government to find a successful ending to this ordeal are bleak. Therefore, Ukraine`s domestic strife is likely to persist for some time to come.

Probability of "Party of the Regions` retaining power is dramatically reduced. Experts believe Ukraine is divided, with Crimea factor not to be discarded. Thus, in political-ideological terms, Ukraine may conditionally be divided into three camps - Western, Eastern and Southern. Perhaps these factors could be employed by both the West and Russia in order to force Ukraine into submission. Given the fact that Ukraine`s opposition has been armed, a probability of civil war in the country has to be dully acknowledged.

It is intriguing that resignation of the Ukrainian government has hardly changed anything. Forces within the Parliament failed to reach an agreement. This means that main cause of the problem is yet to be tackled. Under the circumstances, there are scarce chances of reconciliation between the authorities and the opposition. One may speculate on several versions of future developments.

First: V.Yanukovich succumbs to pressure and resigns. In that event, Presidential elections would have to be held in 2014. Holding of elections in an objective and peaceful environment may prove to be challenge. Then, a civil war scenario must be taken into account.

Second: Yanukovich displays a resolute posture at the behest of Moscow. This once again increases the possibility of armed clashes. Since radical groups within the opposition may choose not to abandon fighting on the streets, the process would escalate into an all out civil war.

Third: Opposition may resort to more radical actions. Then, law-enforcement bodies come into play. Should they opt to interfere into the processes, declaration of martial law in the country would be inevitable. Washington is known to be against such a scenario, with threats of sanctions being imposed by the latter.

There could be other scenarios but in any event, the country, admittedly, is in the geopolitical risk zone. And there is no light at the end of the tunnel just yet. From the very outset, Ukraine apparently has failed to completely substantiate its geopolitical course. As some experts noted, contradictions of the "neoliberal shock lines` have started to emerge. Therefore, clarification of the processes in Ukraine would presumably take time.