Washington Post: Russia is remaking itself as the leader of the anti-Western world 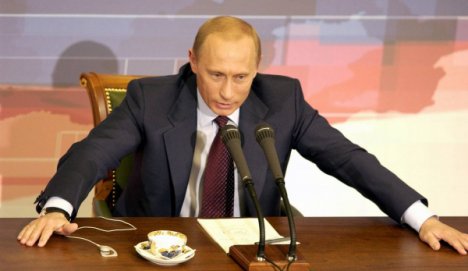 “This is not another Cold War that we’re entering into,” President Obama said Wednesday in Brussels, presenting the post-Crimea world order as he sees it after consultations with other NATO leaders. “After all, unlike the Soviet Union, Russia leads no bloc of nations, no global ideology.”

President Vladimir Putin would surely beg to differ. Over the past two years, a new ideology has taken shape at the Kremlin. Insistently pushed out over the airwaves of state-controlled television, it has taken hold as Russia’s national idea — and is the driving force behind its newly aggressive international posture. Russia is remaking itself as the leader of the anti-Western world.

During his annual state-of-the-federation address to parliament in December, Putin articulated this ideology. This in itself was novel: For his preceding 13 years at the helm, Putin had stuck to the pragmatic in his speeches. Now he was putting forth a vision for which many Russians had longed in the nearly quarter-century since the Soviet Union collapsed, leaving a giant hole where its citizens’ identities used to be.

In his December speech, Putin said that Russia had no superpower ambitions in the sense of “a claim to global or regional hegemony.” Yet, he said, “We will strive to be leaders.” In explaining Russia’s new identity with relationship to the West and its claim on leadership, he said:

“This is absolutely objective and understandable for a state like Russia, with its great history and culture, with many centuries of experience not of so-called tolerance, neutered and barren, but of the real organic life of different peoples existing together within the framework of a single state.” Putin was placing Russia’s very approach to life in opposition to the Western one. The “so-called tolerance” he mentioned as the key feature of Western civilization is, from this perspective, nothing but a slide into immorality. More likely than not, that includes homosexuality, which is why tolerance is described as “barren and neutered.”

“Today many nations are revising their moral values and ethical norms, eroding ethnic traditions and differences between peoples and cultures,” he continued. “Society is now required not only to recognize everyone’s right to the freedom of consciousness, political views and privacy, but also to accept without question the equality of good and evil, strange as it seems, concepts that are opposite in meaning.”

Finally, said Putin, it was time to resist this scourge of tolerance and diversity creeping in from the West. “We know that there are more and more people in the world who support our position on defending traditional values,” he asserted. Russia’s role is to “prevent movement backward and downward, into chaotic darkness and a return to a primitive state.”

In short, Putin intends to save the world from the West. He has started with Crimea. When he says he is protecting ethnic Russians in Ukraine, he means he is protecting them from the many terrible things that come from the West. A few days after the December address, Alexei Pushkov, head of the Duma committee on foreign relations, defined that threat on the floor of the chamber: “European Union advisers in practically every ministry of any significance, control over the flow of finances and over national programs, and a broadening of the sphere of gay culture, which has become the European Union’s official policy.”

Three months later, this is exactly how Russians see the events in Ukraine: The West is literally taking over, and only Russian troops can stand between the Slavic country’s unsuspecting citizens and the homosexuals marching in from Brussels.

Now, Russia is not leading a bloc of nations in this new anti-Western crusade — at least, not yet. But it is certainly not alone in its longing for “traditional values.” Russia has been assembling an informal “traditional values” bloc in the United Nations, where the Human Rights Council has passed a series of Russian-sponsored resolutions opposing gay rights over the past three years. Russia’s allies in passing these resolutions include not only its post-Soviet neighbors but also China, Ecuador, Malaysia and more than a dozen other states.

The anti-gay agenda may seem like a thin basis for forming a militant international alliance of state-actors, but it has great unifying potential when framed in terms of a broader anti-Western effort and, indeed, a civilizational mission.

That mission, rather than the mere desire to bite off a piece of a neighboring country, is the driving force behind Putin’s new war — and the reason the Russian public supports it so strongly. This war, they hope, will make Russia not only bigger but also make it great again.