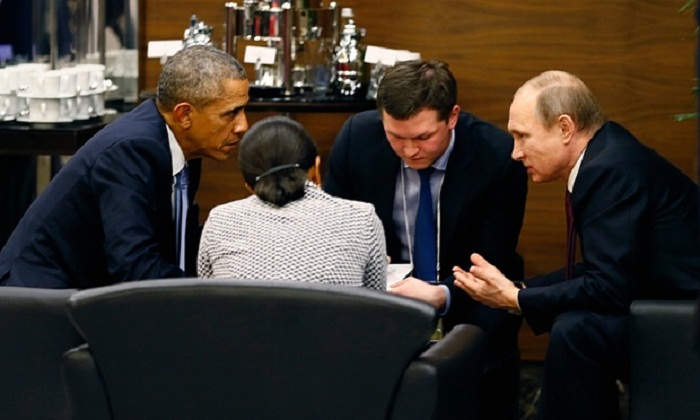 The United States and Russia have reached consensus at the G20 on the need for "a Syrian-led and Syrian-owned political transition" following a sidelines meeting between Barack Obama and Vladimir Putin on Sunday.
A White House official said Obama and Putin had agreed the United Nations would mediate negotiations between the Syrian opposition and the regime after a ceasefire.

The thaw between Obama and Putin came in the lead-up to the summit’s working dinner, whereG20 leaders were due to focus on strategies to counter violent extremism.

Earlier in the day, the US president used his opening remarks at the summit to declare America would intensify efforts to “eliminate”Islamic State and also bring about a “peaceful transition” in Syria.

The Australian prime minister, Malcolm Turnbull, had a brief discussion with president Obama before the leaders gathered for the G20 “family photo”.

Turnbull and Obama will meet for longer talks at the Apec summit in Manila on Tuesday.

In addition to pushing a political solution for Syria, officials told the Guardian, Obama used interventions during summit sessions on Sunday to urge leaders to produce a strong communiqué on climate change as a precursor to the UN-led climate talks in Paris next month.

Turnbull also made a couple of interventions during Sunday’s sessions, noting the Antalya summit would not meet the economic growth targets set last year in Brisbane to raise collective gross domestic product by more than 2%.

Turnbull, at his first international summit since taking over as prime minister from Tony Abbott, introduced himself to his G20 counterparts by delivering awell-worn stump speech about the importance of agility and innovation, and referring to his domestic policy agenda to boost urban infrastructure.

Turnbull quoted the mayor of Bogota: “A developed coun¬try is not a place where the poor have cars. It’s where the rich use pub¬lic trans¬port.”

The opening G20 session on Sunday paused for a minute’s silence to honour the 129 victims of Friday’s terror attacks in Paris, and the 102 people who died in Ankara in October when two bombs were detonated outside the railway station.

The G20 host, Turkish president, Recep Tayyip Erdoğan said terrorism was a threat to the world’s peace and security. There was a link between the global economy, the core focus of the G20 grouping, and security, he said.

With the summit overshadowed by the shocking events in Paris, Turnbull used a bilateral meeting with the French foreign minister, Laurent Fabius, to reiterate Australia’s support. “We are utterly shoulder to shoulder with you in the fight against terrorism,” Turnbull said.

Fabius, who is standing in at the G20 for president François Hollande, told Turnbull the Paris attack had been a shock to his country.

He said extremists were provoking “civil war” by trying to divide his country against Muslims who are “not at all terrorists”.

Fabius said the attacks were deliberate strikes against French values and the French way of life – not a protest against military actions in Syria and Iraq. “What they do not accept is, it is not our actions – it is what we are.”

Fabius said the terrorists deliberately targeted a nightclub district because they “don’t accept the fact that we dance”.

“They want the majority of the population to equate Muslims to terrorism in order to have some sort of civil war,” he said.

European leaders at the summit rejected calls by right wing populist parties and governments in the EU to drastically overhaul migration rules in the wake of the Paris attacks.

“Those who organised, who perpetrated, the attacks are the very same people who the refugees are fleeing, and not the opposite,” Juncker said in a press conference. “And so there is no need for an overall review of the European policy on refugees.”

The prime minister pushed on with a program of bilateral meetings at the Antalya summit on Sunday.

Early in the day he secured agreement from the leadership of the European Union to begin negotiations on a free trade agreement between Australia and the EU in 2017.

Turnbull had previously secured the backing of the German chancellor, Angela Merkel, during their meeting in Berlin on Friday to pursue the free trade agreement with the EU.

Modi said Australia and India were “very close friends and forging ahead as strategic partners.”

Turnbull was due to meet the president of China, Xi Jinping, on the sidelines of the G20 summit on Monday morning before leaving Turkey for the Apec summit.