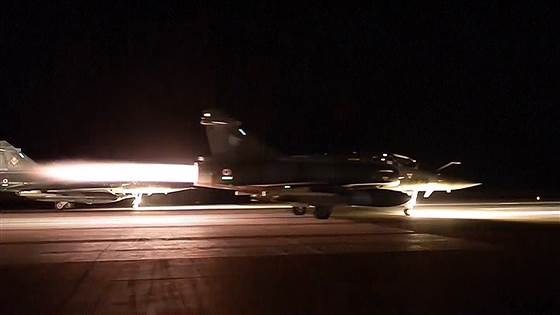 “The raid ... including 10 fighter jets, was launched simultaneously from the United Arab Emirates and Jordan. Twenty bombs were dropped,” the statement said, adding that the mission had taken placeon Sunday evening.

The operation, carried out in coordination with US forces, struck a command centre, recruitment centre for jihadists, a munitions depot, and a training camp for fighters. The sites targeted had previously been identified on reconnaissance flights, the statement said.

A defence official was quoted by Associated Press as saying the strikes were “massive” and had destroyed two jihadi sites in Raqqa.

“The first target destroyed was used by Daesh [an alternative name for Isis] as a command post, jihadist recruitment centre and arms and munitions depot. The second held a terrorist training camp,” a ministry statement said.

Reports from activists inside Raqqa suggest the airstrike targets were known Isis strongholds, including Division 17, an army base to the north of the city that had been under Isis control since July 2014.

The French retaliatory strikes were discussed between the French defence minister, Jean-Yves Le Drain, and the US defence secretary, Ash Carter, in phonecalls on Saturday and Sunday.

In the aftermath of the attacks on Paris, the French president, François Hollande, said terrorists strikes were an “act of war” on France, “organised and planned from the outside”.

He said the attackers wanted “to scare us and fill us with dread”, but warned France’s retribution would be swift and unflinching.

“We are going to lead a war which will be pitiless. Because when terrorists are capable of committing such atrocities they must be certain that they are facing a determined France, a united France, a France that is together and does not let itself be moved, even if today we express infinite sorrow.”

France’s decision to launch retaliatory airstrikes was an act of “self-defence”, French foreign minister, Laurent Fabius, said, speaking on the first day of the G20 summit in Turkey.

“France has always said that because she has been threatened and attacked by Daesh, it would be normal that she would react in the framework of self-defence. That’s what we did today with the strikes on Raqqa,” he said. “We can’t let Daesh act without reacting.”

French interior minister Bernard Cazeneuve said the attack on Paris was masterminded by terrorist leaders within Syria, who “commissioned” operatives in Belgium to carry out the assault.

“A group situated in Syria... is organising attacks [with] actors situated in Belgium who are not known to our services, and is inciting them to act on French territory, just like they incite them to act in other European cities,” Cazeneuve said in an interview on France 2 TV.

“As a result, we are facing a new reality, one of acts of war organised by Barbarians from inside Syria.”

Information from inside Syria suggested the bombings had cut water and electricity supplies across Raqqa.

Activists in the city have said the bombings have caused “panic”, but the Syrian Observatory for Human Rights said it had “no information about casualties so far”.
Islamic State’s media arm, Amaaq, claimed the airstrikes hit sites that had already been abandoned, and that no-one was killed, CNN reported.

Raqqa is claimed as the de facto capital of the Isis “caliphate”, and has come increasingly under the control of the terrorist organisation since 2013.

The city has hollowed out under Isis rule – the population has fallen from about 1 million to 400,000 – and Isis has imposed an increasingly harsh regime on those who remain.

The US has forecast an escalation in its operations in Syria and Iraq.

In recent weeks, Barack Obama has approved increased airstrikes on both countries, and authorised the deployment of 50 special operations soldiers to bolster Syrian Kurdish and Arab forces fighting Isis on the ground.

Speaking on Saturday, the Iraqi foreign minister Ibrahim al-Jaafari said it was known before Friday that Isis attacks on foreign targets were imminent. He said Iraqi intelligence services had shared information that strikes on France, the US, and Iran were being planned.

“Information has been obtained from Iraqi intelligence sources that the countries to be targeted soon, before it occurred, are Europe in general, specifically France, as well as America and Iran,” Jaafari said.

But the Iraqi alert was judged routine by US and other authorities, one of many issued by Baghdad since IS began its expansion several years ago. The alert did not give a timeframe nor specifically identify Paris as IS’s next international target.